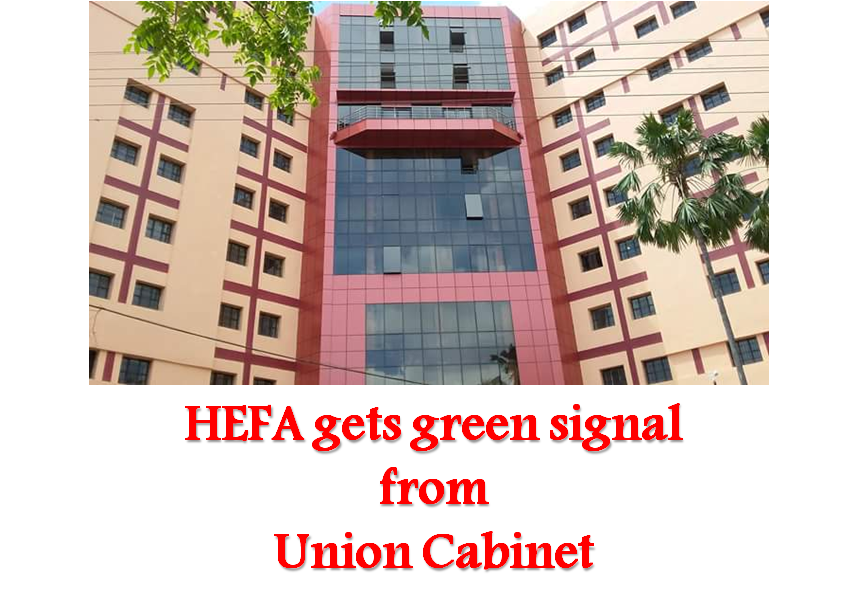 Higher Education Financing Agency (HEFA) finally received the ‘yes’ nod from Union Cabinet. The main aim of setting up HEFA is to boost funds for high quality infrastructure in educational bodies including the premiere ones like IITs, IIMs and NITs.

The Union Cabinet has approved of HEFA with an authorized capital of Rs 2000 crore. The government equity will be Rs 1000 crore.

Higher Educational Financing Agency (HEFA) is aimed to be set up by the Union Cabinet for enhancing the infrastructure of educational institutes.

HEFA will be promoted jointly by an identified promoter and the Ministry of Human Resource Development (MHRD). It will be formed as a special purpose vehicle/ entity with a PSU bank or government owned non banking financial company.

What are the objectives of HEFA?

The chief proposed function of HEFA will be to leverage funds from market and use it for financial improvement in educational institutions especially in infrastructure. In addition to this, HEFA will also channelize funds from PSUs for research and innovation in various educational bodies. Finance improvement will be focused for civil and lab infrastructure of institutions.

Who can be a part of HEFA?

All higher educational institutions (centrally funded) can be a part of HEFA provided they agree to escrow the specific amount set for joining members. The amount will be a part of the earned revenue of the institutions and should be given for a period of 10 years.

How will HEFA function?

HEFA will function by financing loans to institutes at a slightly higher interest rate for a period of 10 year. The principal amount of the loan will be repaid by internal accruals which would include fee receipts, research earnings, etc. Government will chalk out regular plan assistance for the interest portion.

What will be the effects of HEFA?

Since there will be a system of lending of revenue by educational institutes, there’s a major possibility of fee hike. It is because in order to be a part of HEFA, institutes need to have surplus revenues. It is anticipated that centrally funded institutes are going to be affected the worst; it is because the fee levied on students of such institutes is too small in comparison to private bodies.

HEFA can improve research and innovation sector. As per the update given by MHRD one third of the fund will be for laboratories and libraries.

Though ‘no fee hike’ has been assured by MHRD, but it’s almost impossible to rule out its probability.