UP Board Class 9 Maths Reduced Syllabus is available here for the upcoming Annual Exam 2021. Also, check here the topics removed from the syllabus. 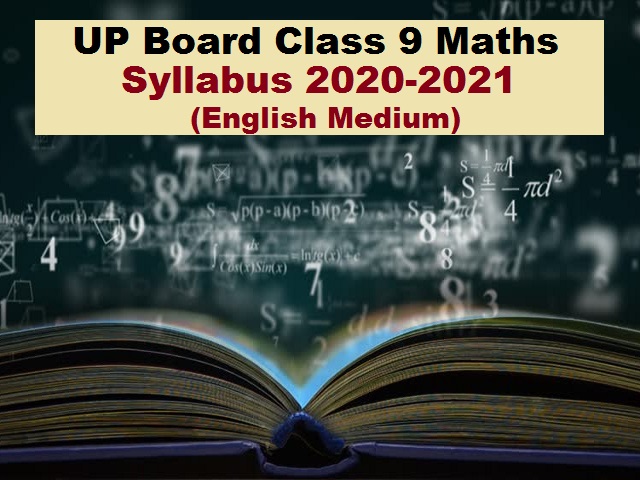 Check the UP Board Class 9 Maths Reduced Syllabus 2020-2021. This is the latest syllabus that has been released after deleting about 30% portion of the previous syllabus. UP Board Class 9 Maths Annual Exam 2021 will be conducted entirely on the basis of the reduced syllabus. So, go through the full syllabus to know the course structure and prepare well for your annual UP Board exam.

As the regular teaching – learning in schools, during the session 2020-21, has widely been affected due to the Covid – 19 pandemic, the subject experts committee, after due consideration, has recommended to reduce the syllabus by 30% in the following manner:

History - Geometry in India and Euclid's geometry. Euclid's method of formalizing observed phenomenon into rigorous mathematics with definitions, common/obvious notions, axioms/postulates and theorems. The five postulates of Euclid. Equivalent versions of the fifth postulate. Showing the relationship between axiom and theorem, for example:

• (Axiom) 1. Given two distinct points, there exists one and only one line through them.

• (Theorem) 2. (Prove) Two distinct lines cannot have more than one point in common.

• (Prove) The diagonal divides a parallelogram into two congruent triangles.

• (Motivate) In a parallelogram opposite sides are equal, and conversely.

• (Motivate) In a parallelogram opposite angles are equal, and conversely.

• (Motivate) A quadrilateral is a parallelogram if a pair of its opposite sides are parallel and equal.

• (Motivate) In a parallelogram, the diagonals bisect each other and conversely.

• (Motivate) In a triangle, the line segment joining the mid points of any two sides is parallel to the third side and its converse.

1. (Prove) Parallelograms on the same base and between the same parallels have the same area.

2. (Motivate) Triangles on the same (or equal base) base and between the same parallels are equal in area.

1. Construction of bisectors of line segments and angles of measure 60°, 90°, 45° etc., equilateral triangles.

• Existence of √x for a given positive real number x (visual proof to be emphasized).

• Definition of nth root of a real number.

• Rationalization (with precise meaning) of real numbers of the type

(and their combinations) where x and y are natural number and and b are integers.

• Recall of laws of exponents with integral powers. Rational exponents with positive real bases (to be done by particular cases, allowing learner to arrive at the general laws.)

Recall of linear equations in one variable. Introduction to the equation in two variables.

• (Motivate) If a ray stands on a line, then the sum of the two adjacent angles so formed is 180o and the converse.

• (Prove) If two lines intersect, the vertically opposite angles are equal.

• (Motivate) If a side of a triangle is produced, the exterior angle so formed is equal to the sum of the two interior opposite angles.

• (Prove) The angles opposite to equal sides of a triangle are equal.

• (Motivate) The sides opposite to equal angles of a triangle are equal.

• (Prove) Equal chords of a circle subtend equal angles at the center and (motivate) its converse.

• (Motivate) There is one and only one circle passing through three given non-collinear points.

• (Motivate) Equal chords of a circle (or of congruent circles) are equidistant from the center (or their respective centers) and conversely.

• (Motivate) Angles in the same segment of a circle are equal.

• (Motivate) If a line segment joining two points subtends an equal angle at two other points lying on the same side of the line containing the segment, the four points lie on a circle.

• (Motivate) The sum of either of the pair of the opposite angles of a cyclic quadrilateral is 180o and its converse.

Area of a triangle using Heron’s formula (without proof) and its application in finding the area of a quadrilateral.

Focus is on empirical probability. (A large amount of time to be devoted to group and to individual activities to motivate the concept; the experiments to be drawn from real-life situations, and from examples used in the chapter on statistics).

Note : Student should prepare any two projects from the following (serial no- 1 to 10), teachers can also give other projects related to the subject from their level and one project from point 11 should be compulsorily prepared by the students.

1- To study the role of the different geometrical shapes in architecture and construction.

2- Elucidating the life and works of any one of the Medieval Mathematician of India (Aryabatt, Shridharacharya, Mahaviracharya etc.).

4- Making the income - expenditure budget of your home.

6- To study the different types of accounts opened in Bank and their interest rates.

7- To make different shapes by cutting a chart paper or a cardboard and define their features.

10- To do the comparative analysis of the price of grains of any three grain markets through the newspaper.

Part a. Bright traditions of Mathematics in India.

Given below is the link to download the complete syllabus of UP Board Class 9 Maths: