In this article, we have provided types of questions that can be expected in UPSC Civil Services Mains GS Paper III related to locust attack and how can aspirants answer such questions in an efficient and effective way to score high marks. 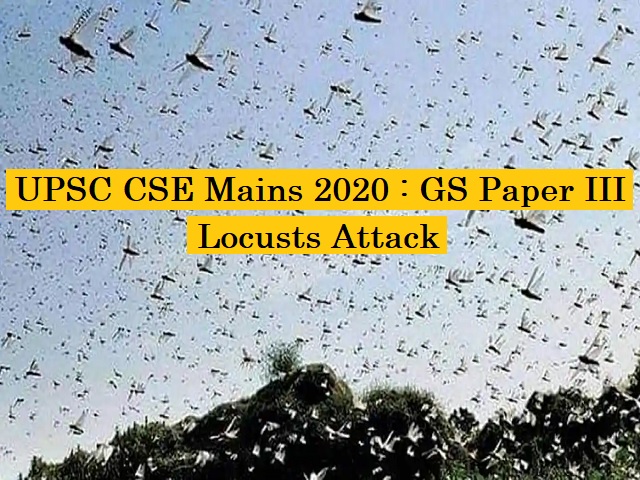 UPSC IAS Mains 2020 (GS Paper III): The months of May-July 2020 were a dreaded period for Indian farmers with the country experiencing the worst locust attack ever. During these few months, major locust attacks were observed in several countries in western and southern Asia and in eastern Africa. The attack was so severe that countries like Pakistan and Somalia declared locust emergencies. In India, locusts attacks emanating from the desert area in Pakistan struck parts of Rajasthan and Gujarat, Maharashtra, Madhya Pradesh, UP, and even to the eastern states of Bihar, Odisha, and Chattisgarh.

The recent attack of Locusts is an important topic to be prepared for the UPSC IAS Mains 2020 GS Paper III - Disaster Management. First, let’s discuss the type of questions that can be asked from the topic.

How to write an effective answer for UPSC Mains 2020 GS Paper III?

Before beginning to answer to any question for the UPSC mains, it is necessary to examine the requirements of the question. Words like examine, discuss, elaborate, explain, etc. in the question have different meanings. Hence it is important to understand the key demands of the questions.

The given question 1 above asks the examinee the meaning and types of locusts as well as the conditions which are categorized as locust attack. The second part of the question indicates to debate through the details of the issues concerned by examining each one of them. You have to give reasons for both for and against arguments.

Structure of the Answer:

Introduction: The first swarms were sighted along the India-Pakistan border on 11th April 2020, months ahead of the usual time of arrival. In India, locusts are sighted normally during July- October along the Pakistan border.

Body: Locusts are a collection of certain species of short-horned grasshoppers in the family Acrididae that have a swarming phase. These insects are usually solitary, but under certain circumstances they become more abundant and change their behaviour and habits, becoming gregarious. The swarms devour leaves, flowers, fruits, seeds, bark, and growing points, and also destroy plants by their sheer weight as they descend on them in massive numbers.

The desert locust is regarded as the most destructive pest in India as well as internationally, with a small swarm covering one square kilometer being able to consume the same amount of food in one day as 35,000 people

In many states of western India, including Rajasthan, Uttar Pradesh (UP), Madhya Pradesh, swarms of desert locusts invaded from Pakistan and destroyed the crops.

Since 1993, India has not experienced full-blown locust cycles. Last year, heavy rains and a growing number of cyclones were both the result of the climate crisis, allowing unprecedented breeding and the rapid growth of locusts on the Arabian Peninsula.

A crucial aspect of global warming, i.e. it can connect disparate disasters, floods, pandemics, and pestilence, amplifying the potency of each, is illustrated by the high severity of insect attacks and their early arrival.

There are two meteorological drivers behind the current locust attack in India:

Locusts are known to be passive flyers and generally follow the wind. Their movement has been aided by westerly winds, which further strengthened by the low-pressure area created by Cyclone Amphan in the Bay of Bengal.

On Farmers: This means that locusts not only devour valuable standing crops but can also devastate the livelihoods of farmers and those associated with the agricultural supply chain.

On Food Security: If their breeding is coterminous with that of the Kharif crop, then it could well have a detrimental effect on rice, maize, and sorghum.

On Urban Areas: Due to the recent harvest of Rabi crops, there were no crops in the field. This led to the desert locusts invade green spaces in urban areas

In order to deal with natural disasters such as locust attacks, an integrated climate change mitigation, disaster management, and sustainable development system needs to be developed.

→Immediate action: Preventive control of the locust attack by aerial spraying of the optimum amount of insecticides at all possible breeding sites, along with continuous crop monitoring during the subsequent Kharif season, is required.

→Need for Systemic Locust Study: The Indian Council of Agricultural Research (ICAR) has admitted that since the 1990s there has not been much" systematic research "on desert locusts and the current invasion is a wake-up call to revive the program.

→Strengthening the Climate Change Research Framework: Because of the emergence of new dimensions of climate change, it is important for India to allocate more funds to forecast the trajectory of current global environmental changes in order to understand the causes, implications, and formulate national responses.

There is also a need to strengthen the disaster management framework at the local level as highlighted by the Fourteenth Finance Commission report and Disaster Management Act, 2005.