Aspirants of the UPSC IAS Prelims 2021 exam can check below 10 important questions on the appointment, powers, and removal of the Prime Minister, Chief Ministers and Council of Ministers topics of Indian Polity. 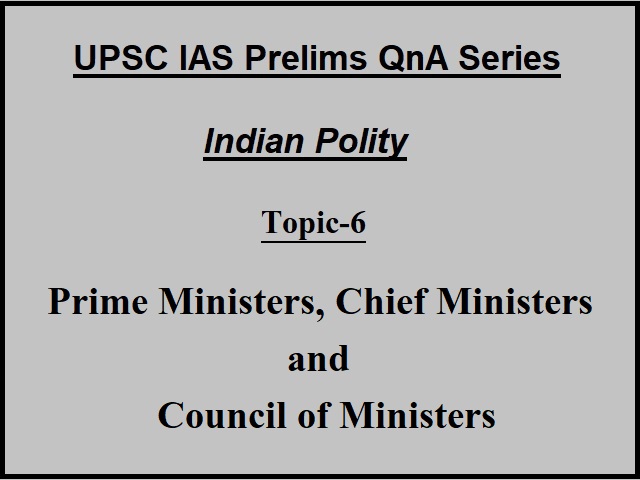 UPSC IAS Exam 2021: The appointment, powers, and removal of the Prime Minister, Chief Minister and Council of Ministers are some of the most important topics of the UPSC Polity syllabus. Every year one to two questions are asked from one of these topics in the Prelims exam. Aspirants preparing for the coveted civil services exams must thoroughly study and revise these topics to score well in Prelims as well as in Mains GS 2 paper.

To help the aspirants in their preparation and revision, we have provided 10 questions based on the latest UPSC Prelims pattern. These questions have been framed by the subject expert on the three most important topics of Indian Polity.

Ques 1: The Prime Minister must be a member of which of the following house?

c)  Either of the houses

d)  Not a necessary condition being a member of either house

Ques 2: The Prime Minister advises President with regard to the appointment of whom among the following?

b)  Chairman and members of the UPSC

c)  Chairman and members of the Finance Commission

d)  All of the above

Ques 3: Which of the following is / are parts of Union Executive?

Ques 4: Which of the following is not matched correctly?

a) Article 167: Duties of the Chief Minister

b) Article 163: sworn in of the Chief Minister

Ques 5: With reference to the powers enjoyed by the Prime Minister which of the following is incorrect?

a)  He advises the President with regard to summoning and proroguing of the sessions of the Parliament.

b)  He can recommend dissolution of the Lok Sabha to President at any time.

c)  He can recommend dissolution of the Rajya Sabha to President at any time.

d) He announces government policies on the floor of the House.

Ques 6: Who among the following Prime Minister was appointed by President using his discretionary powers for the first time:

Ques 7: Which of the following statements is false?

a) Chief Minister's tenure is not fixed (with some conditions).

b) If the Chief Minister resigns from his post then the entire Council of Ministers has to resign.

c) The Governor is the President of the Inter-state Council.

d) The collective responsibility of the Council of Ministers is to the State legislature.

Ques 8: Consider the following statements regarding the role of President in appointment of Prime Minister:

III.    The discretion was exercised by the President, for the first time in 1979, when Neelam Sanjiva Reddy (the then President) appointed Charan Singh (the coalition leader) as the Prime Minister after the fall of the Janata Party government headed by Morarji Desai.

d)  All of the above

Ques 9: The council of ministers shall be collectively responsible to the house of people”. Which article states this?

Ques 10: The Prime Minister must be a member of which of the following house?

c)  Either of the houses

d)  Not a necessary condition being a member of either house