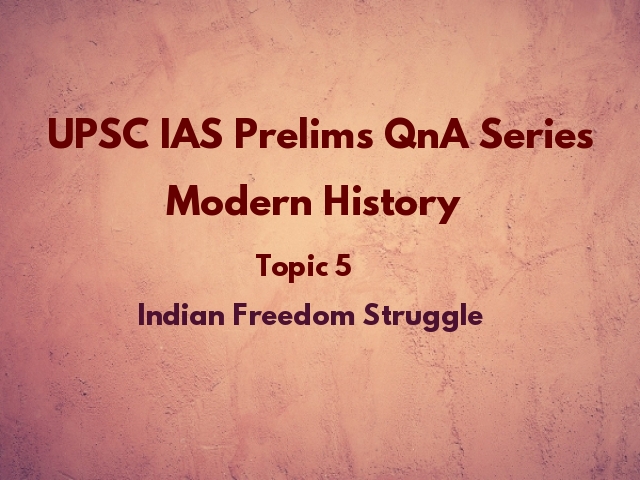 India’s struggle for independence is known to the masses and makes an important chapter in the evolution of India as a free nation. The British expansionist policies, economic exploitation, and administrative innovations over the years had adversely affected the masses and the fire to free the country spread across the nation. The topic is important from the Prelims perspective and aspirants should study each part in detail. Once through the preparation, you can solve mock tests and quizzes to test your preparation. Below we have provided 10 important questions from the British Conquest in India topic of Modern History. Questions are accompanied by the correct answer and an attached explanation. Aspirants can solve these topic-wise important questions to test their preparation level.

Ques 1: Neel Darpan, which gained great fame for vividly portraying the oppression by the Indigo planters, is written by

Ques 2: Who was the President of Lucknow Session of Indian National Congress (1916)?

Ques 3: Which of the following Indian activist, thinker and social reformer was famously known as Lokhitwadi?

Ques 4: Winch one of the following had drafted the fundamental rights resolution at the Karachi Session, 1931?

Ques 5: Bhagat Singh and B.K. Dutt threw a bomb in the Central Legislative Assembly on 8th April 1929 as a protest to which of the following Bill/Act?

Ques 6: The first President of Indian National Congress was:

Ques 7: Many local struggles emerged during the non cooperation movement which gave definition to spirit of defiance at the regional level to the national struggle. Which of the below movement are correctly match with the given local cause?

1) Sikh agitation - For the removal of Mahants in Punjab.

2) Eka Movement – Due to oppression of ‘thekedhars’ who were entrusted to collect high rents.

3) Awadh Kisan Movement - Due to exorbitant rents, illegal levies and renewal fees that had made life tough for peasants.

Ques 8: The adoption by the Congress of the non-cooperation movement initiated, earlier by the Khilafat Committee gave it a new energy. Consider the following statements that show the intensity of upsurge:

1) Foreign products were boycotted and the British imports fell by half the initial amount.

Ques 9: The Congress-Khilafat Swarajya Party formation as the aftermath reaction of withdrawal of non cooperation was Established by?

Ques 10: Most of the nationalist leaders expressed their bewilderment at Gandhi's decision to withdraw the non cooperation movement. Match the following reactions :

1) Jawahar Lal Nehru called the withdrawal as nothing short of a National Calamity.

2) Gandhiji said “I would suffer every humiliation, every torture, absolute ostracism and death itself to prevent the movement from becoming violent”