Check most important questions on facts related to Africa in this article. Aspirants of UPSC Civil Services Prelims 2021 exams can solve these questions to test their knowledge of World Geography. 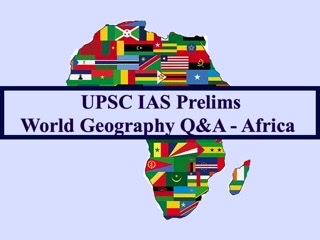 Africa is the second largest continent, after Asia. According to paleoanthropologists (One who studies the human fossils scientifically), Africa is the oldest territory of the Earth where the human species evolved. It is the only continent to extend from the northern temperate zone to the southern temperate zone. In this new series, we will provide important questions on every continent of the world. The questions will cover climatology, Oceanography among other important physical geography concepts.  In this article, we have provided all the important questions related to Africa which is useful for the preparation of the UPSC (IAS) Civil Services Exam 2021.

Ques 1: Which of the following African river crosses the equator twice during its course

Ques 2: Arrange the following African islands off its coast from East to West orientation

Ques 3: Consider the following statements regarding the Atlas Mountains:

Ques 4: Nubian Desert is the eastern region of the Sahara desert, lies between which two water bodies?

(a) Nile and Mediterranean Sea

(b) Senegal and Atlantic Ocean

(c) Nile and the Red Sea

Ques 5: Lake Nasser is on the river

Ques 6: Doumeira Islands, sometimes seen in news is located in –

Ques 8: Sudan is an example of which of the following types of climates?

Ques 9: How many time zones are present in Africa?

Ques 10: Tugela Falls is the second highest waterfall in the world which lies in which country of Africa?