In this article, check most important questions on facts related to South America.  Aspirants of UPSC Civil Services Prelims 2021 exams can solve these questions to test their knowledge of World Geography. 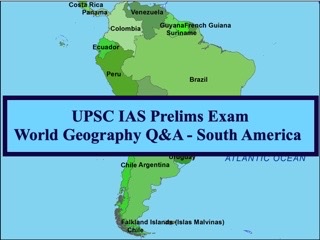 South America is the fourth largest continent in size. It is bordered by the Atlantic Ocean to the east and the Pacific Ocean to the west. The geography of South America is dominated by the Andes Mountain Range and the Amazon River. The Equator passes through the northern part of the continent and the Tropic of Capricorn runs roughly through the middle. Because of its tapering shape, a major part of the landmass is in the tropics. South America lies on the west of the Prime Meridian. So the time at any place on this continent will be some hours less than or behind the Greenwich Mean Time.

Ques 1: Which of the following islands of Ecuador is the natural fertility centre of Olive Ridley Turtle, species recently seen in news?

(a) Robinson Crusoe Island of Ecuador

(b) Galapagos Island of Ecuador

Ques 3: Mount Aconcagua, the highest mountain peak of South America, lies in which of the following country?

Ques 4: Match the following grasslands with their countries:

Ques 5: Atacama desert, the driest place on Earth is located at:

Ques 6: The world’s highest waterfall Angel (979 m) drains its water from which river?

Ques 7: Which one of the following is the largest lak of South America?

Ques 8: “Lithium Triangle” often seen in the news, is used for which three countries?

(a) Chile, Bolivia and Argentina

(b) Brazil, Argentina and Uruguay

Ques 9: Consider the following statements with respect to Pantanal:

Ques 10: The savanna grasslands of Brazilian Highlands are called: