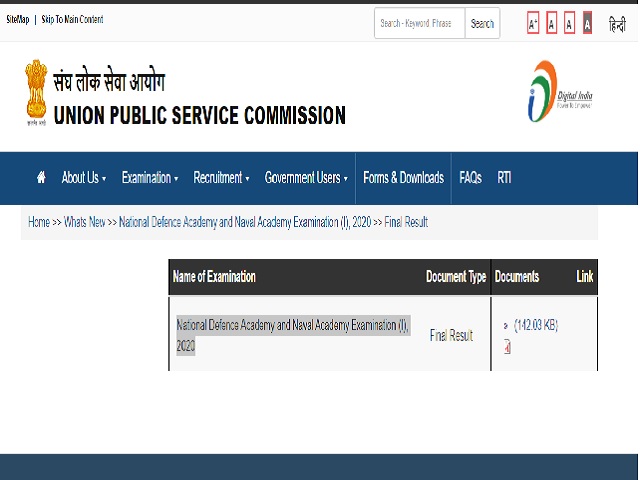 UPSC NDA NA 1 Result 2021 was released on 6 March 2021. According to this, 533 candidates have been finally selected for the appointment to the Army, Navy and Air Force wings of National Defence Academy for the 145th Course and Naval Academy for the 107th Indian Naval Academy Course (INAC). The provisional result have been uploaded on the basis of the exam and interview.

The commission had conducted the exam on 6 September 2020. The candidates can now download  National Defence Academy &  Naval Academy Marks 2019 by following the easy steps given below. The direct link of the marks and result are given below.

How and Where to Download  National Defence Academy &  Naval Academy Marks 2019?

The selected candidates are required to submit the requisite certificates in support of date of birth and educational qualifications etc. claimed by them directly to the Additional Directorate General of Recruiting, Adjutant General’s Branch, Integrated Headquarters, Ministry of Defence (Army), West Block No.III, Wing–I, R.K Puram, New Delhi -110066. The candidates can download  UPSC NDA NA 1 Marks 2019 by clicking on the above link.