In this article find 5 questions (#51 to #55) from WBJEE 2014 Solved Physics Question Paper. This solved paper will help students in their final level of preparation for WBJEE Exam. WBJEE is a common entrance examinations held at state level for admission to the undergraduate level engineering and medical courses in the state of West Bengal.

Find WBJEE 2014 Solved Physics Question Paper – Part 11 in this article. This paper consists of 5 questions (#51 to #55) from WBJEE 2014 Physics paper. Detailed solution of these questions has been provided so that students can match their solutions.

51. A glass slab consists of thin u iform layers of progressively decreasing refractive indices RI (see figure) such that the RI of any layer is μ-mΔμ. Here μ and Δμ denote the RI of 0th layer and the difference in RI between any two consecutive layers, respectively. The integer m = 0, 1, 2, 3..... denotes the numbers of the successive layers. A ray of light from the 0th layer enters the 1st layer at an angle of incidence of 30°. After undergoing the mth refraction, the ray emerges parallel to the interface. If μ = 1.5 and Δμ = 0.015, the value of m is 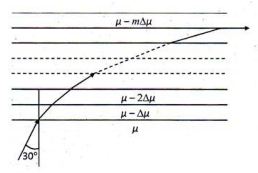 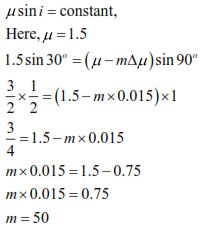 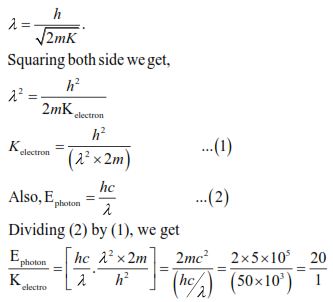 53. Three identical square plates rotate about the axes shown in the figure in such a way that their kinetic energies are equal. Each of the rotation axes passes through the centre of the square. Then the ratio of angular speeds ω1 : ω2 : ω3 is

54. To determine the composition of a bimetallic alloy, a sample is first weighed in air and then in water. These weights are found to be w1 and w2 respectively. If the densities of the two constituent metals are ρ1 and ρ2 respectively, then the weight of the first metal in the sample is (where ρw is the density of water) 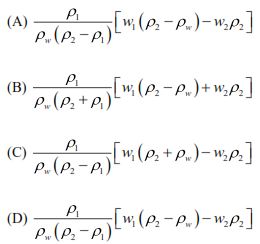 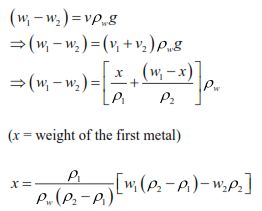 55. Sound waves are passing through two routes-one in straight path and the other along a semicircular path of radius r and are again combined into one pipe and superposed as shown in the figure. If the velocity of sound waves in the pipe is v, then frequencies of resultant waves of maximum amplitude will be integral multiples of 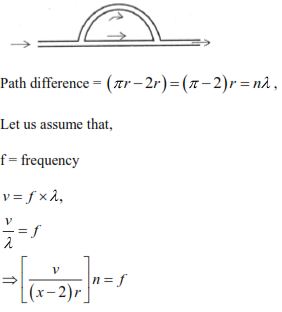