Which one is better for Girls? - SSC CHSL or Bank Clerk

In this article, you find the similarities and dissimilarities between SSC CHSL and Bank Clerk jobs, which can be considered by girls in choosing any one of them as career. 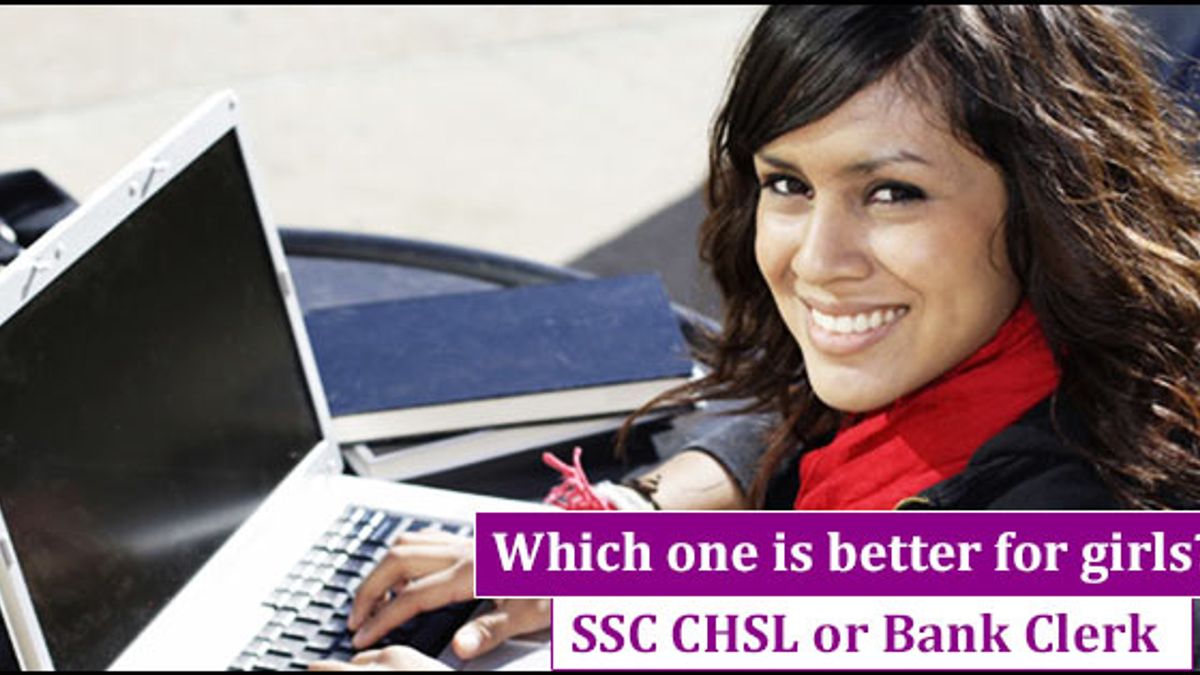 Actually, it purely depends upon one's choice and preferences to choose a career for themselves. No Goal is too high to achieve. Both the jobs are similar in various aspects and different in few cases. Hence, it is hard to justify among them. However, we will evaluate the similarity and dissimilarity between these two in the following article.

When considering SSC CHSL and Bank Clerk, both job profiles in their categories are challenging and offering good growth opportunities. Generally, many aspirants presume that SSC CHSL is better than Bank Clerk but this is not always true and vice-versa. For a girl’s perspective, it depends upon individual preference and ability to take up the challenge.

Both these jobs are safe and secure because after getting selected, you will be deputed under the government departments and public sector banks respectively.

A post under SSC CHSL would not give an opportunity to reach the top position in the respective department. You can be promoted to the inspector or similar to posts. However, it is not possible to become an IAS level officer through departmental promotions. Bank Clerk is a very popular entry in the banking system. Bank Clerk position gives an opportunity to reach the top-level posts like Branch manager or Area manager. Promotion in banks is faster than SSC CHSL posts as banks ensure a steady procedure for promoting clerks at regular time-interval. Banks are PSUs (Public sector Undertakings) and provide their services across the nation. Hence, they have to expand their presence and operations throughout the countries, which in turn create demand of banking personnels. This emanates the possibility of promotions for internal staff, which is actually an excellent opportunity for girls. In banks, clerks and other staff members are promoted every 3-4 years approximately.

On the other hand, in case of SSC CHSL, it depends upon your concerned authority and your service time. There is the special provision of quota for girls in the government department. However, promotions will be awarded merely when there will be departmental vacancies and merit list.

The office timings for Bank Clerk and LDC/UDC through SSC CHSL are the same i.e. 10 am to 5 pm. However, the workload in banks will not allow the clerk to go home on time. Bank Clerk will have more work pressure as compared to SSC Clerks. Hence, keeping our society & culture in mind, every girl is concerned about the office timings and workload factor in finalizing her choice. From this perspective, SSC CHSL clerk job appears more lucrative.

After 7thpay commission, SSC CHSL clerk salary will be a little higher in comparison with Bank Clerks. Although, salary difference is not so much wider. When you think of the entire career, Bank Clerks retains more earnings than any SSC recruit if you want to earn more money, then work for 10-15 years in a PSB and switch to any other private banks. This type of jump is not possible in case of SSC CHSL because SSC CHSL is a job, which is for government offices only.

In SSC CHSL job, work pressure is less and the job is more relaxed in comparison to Bank Clerk. As a Bank Clerk, work pressure is high because they deal with the public directly and besides this, the work of clerk includes general banking, administrative task, or any other task bestowed by their senior management at time to time.

In SSC CHSL, transfers mostly take place on every 4-5 years except CSS department. The person selected through SSC CHSL Exam will mostly stay in metropolitan cities, state capitals, and district headquarters. While in the case of Bank Clerk, transfers take place on every 2-5 years. In both organizations, a transfer is generally based on seniority/promotion level only. The problem with Bank Clerk is that they are posted in a rural area, where proper facilities will be merely available. Girls, who can adjust themselves in rural environment can opt for Bank Clerk jobs.

How many hours to study to clear SSC CHSL exam?

From the above article, we can conclude that salaries, social status, job satisfaction, job challenges, and promotions all vary for SSC CHSL and Bank Clerk posts. Girls can opt any of these depending upon their caliber, personality, preferences, and family support.

We at www.jagranjosh.com hope that the above information will prove helpful and clarify all your questions and doubts.