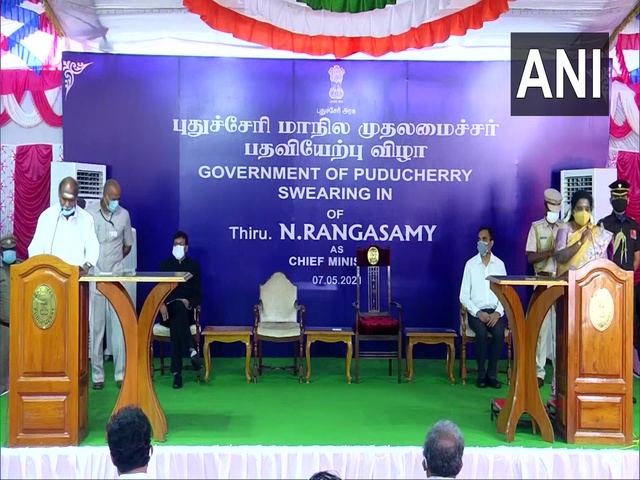 The All India NR Congress (AINRC) leader N Rangasamy took oath as the CM of Puducherry at Raj Nivas on May 7, 2021, for the fourth time.

The Rangasamy-led AINRC alliance is set to form its government in the State, of which BJP will be a part of it for the first time.

The AINRC party won 10 seats while its alliance BJP bagged 6 seats in the Puducherry Assembly Elections 2021. The winning majority mark was 16 seats for Puducherry.

The oath is being administered by Puducherry Governor Tamilisai Soundararajan. pic.twitter.com/fN4al885ad

Who is N Rangasamy?

•N Rangasamy, born in Puducherry, is the Chief Minister of Puducherry. He started his political career by contesting for the first time in the Thattanchavady constituency in 1990 but lost it.

•In 1991, he got appointed as Minister of Agriculture and Co-operation after winning the assembly elections.

•In 2000, he got appointed as the Minister of Tourism, Education, Public Works, Civil Aviation, and Art and Culture.

•In 2001, he held the Ministry of Public Works, Agriculture, and Forest. In the same year, he became the Chief Minister of Puducherry.

•In 2008, he resigned from the Congress party and floated his own party All India NR Congress (AINRC) in 2011. Within three months of forming his party, he became the Chief Minister of Puducherry.