Qatar, the host nation of 2022 FIFA World Cup, is going to build a stadium shaped like an Arabian skull cap for the World Cup quarter-final match. 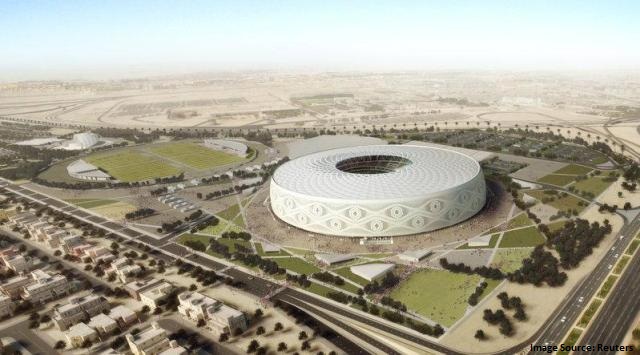 The organisers of the 2022 FIFA World Cup announced on 20 August 2017 that Qatar, the host nation, would be building a stadium shaped like an Arabian skull cap for the event.

The gulf state has moved ahead with its preparations for the big tournament despite rising tensions due to a diplomatic rift with its Arab neighbours.

Four Gulf States including Saudi Arabia, Egypt, Bahrain and the United Arab Emirates boycotted Qatar in June 2017, accusing it of supporting and sponsoring terrorism- a charge that Qatar has denied. The states not only cut off all links with the country but also imposed economic sanctions on it.

Despite the boycott, Qatar has got food flown in from Turkey and Iran and chartered ships through Oman to bring in construction material needed for World Cup building projects.

• The stadium called Al Thumama is located in Doha and will be designed by a Qatari architect in the shape of a traditional knitted "gahfiya" Arabian cap.

• It is expected to host around 40000 fans in the World Cup quarter-final match.

• The venue is one among the at least 8 air-conditioned stadiums Qatar is building.

• Besides this, the Gulf nation is also building a new port and metro system as a part of its $200 billion worth infrastructure upgrade.

Speaking on the stadium’s unique structural plan, Qatar's 2022 committee chief, Hassan al-Thawadi stated that the symbolic design embodies everything that unites them as Arabs and Muslims and is a fitting tribute to the first FIFA World Cup in the Middle East.