Armenia-Azerbaijan Conflict: Almost 100 killed, will this turn into full-fledged war? Know all about it

Armenia and Azerbaijan have been locked in a territorial dispute over Nagorno Karabakh region for almost four decades. The dispute first started in 1988 and over the years it has caused massive human rights violations.

Armenia and Azerbaijan clashes entered their fourth day on September 30, 2020. The two former Soviet republics have rejected all International calls for negotiations and a halt to the fierce fighting over the disputed region of Nagorny Karabakh .

Armenia and Azerbaijan have been locked in a territorial dispute over Nagorno Karabakh region for almost four decades. The dispute first started in 1988 and over the years it has caused massive human rights violations, a severe refugee crisis and impacted the economies of both the republics.

Deadly fighting erupted between the two nations on September 27, which began with the two sides trading heavy fire and blaming each other for the outbreak of violence. The bloody conflict is said to have resulted in the killing of over 100 people with both sides claiming to have inflicted heavy losses on the opposing forces. Despite such a huge death toll, both the warring sides said that they would continue fighting.

Russian President Vladimir Putin and his French counterpart Emmanuel Macron on October 1, 2020 called for an immediate ceasefire between the ethnic Armenian forces and Azerbaijan. Both the leaders thoroughly discussed the “sharp aggravation” in the Nagorno-Karabakh conflict and expressed “serious concern” over the ongoing large-scale hostilities, as per an official statement from Russia.

The two leaders noted that there is no alternative to political and diplomatic process to resolve the crisis, expressing their readiness to make a statement on behalf of co-chairs of OSCE Minsk Group.

Azerbaijan has declared martial law in the border areas, while Armenia has declared it across the country. Armenia also mobilised its male population after the situation escalated in the disputed region.

Armenia Azerbaijan conflict: All you need to know!

Armenia and Azerbaijan have been embroiled in conflict over a piece of land- Nagorno Karabakh- located in the land-locked mountainous region of south Caucasus for almost four decades. The Soviet authorities had merged the predominantly ethnic Armenian territory with Azerbaijan in 1921.

However, disputed Nagorno-Karabakh region was seized by Armenian separatists in the 1990s during the collapse of the Soviet Union. This was followed by a war that left almost 30,000 people dead and forced hundreds of thousands from their homes. 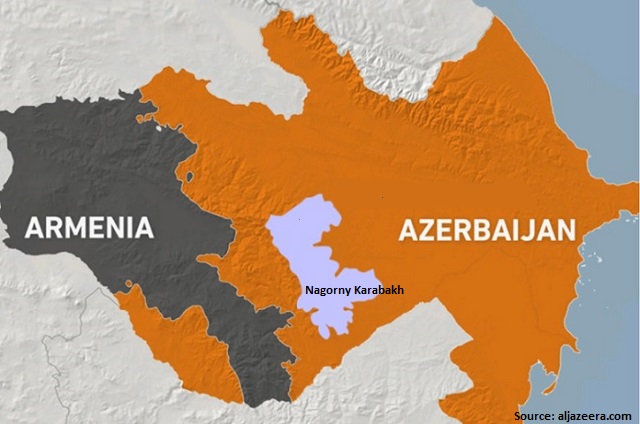 What exactly happened this week?

Earlier this week, the long-simmering conflict escalated with heavy violent clashes re-erupting in the region. The conflict has entered its fourth day now and it exceeds anything that the region has seen in the past 40 years whether in scale or scope. Almost hundreds of lives have been lost including both civilian lives and military lives. This has led to fears of the beginning of a full-fledged war.

How is Turkey Involved?

Armenia has accused Turkey of meddling in the conflict by sending thousands of mercenaries from Syria, a claim swiftly rejected by Turkey. Turkey is reportedly supporting the oil-rich and Turkic-speaking Azerbaijan. Turkey's alliance with Azerbaijan is fuelled by a mutual mistrust of Armenia

Armenia, on the other hand, harbours hostility towards Turkey after the massacre of almost 1.5 million Armenians by Turkey under the Ottoman Empire during World War I. More than 30 nations recognised the killings as genocide though Turkey disputes the term.

How is Russia involved?

Russia leads the Collective Security Treaty Organisation military alliance of ex-Soviet countries that includes Armenia. It is the major powerbroker in the region and shares close ties with Armenia. Armenia relies heavily on Russian support, especially in terms of its military.

On the political front, Armenia has been rocked by political and economic instability ever since it gained independence from the former Soviet Union, while muslim-majority Azerbaijan has been under the authoritarian grip of a single-family since 1993.