Article 35A Scrapped: What is it and why it has been controversial? – Explained Here 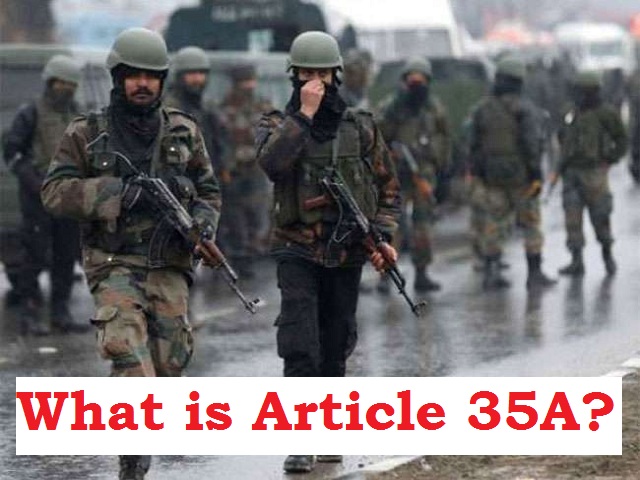 Article 35A of Indian Constitution

Article 370 & 35A Scrapped by President Ram Nath Kovind:  Fears of Jammu & Kashmir political leaders have now taken the shape of reality with the scrapping of the Article 370 & 35A.  Earlier, the deployment of a massive troop in the valley and issue of advisory asking Amarnath pilgrims to curtail their ‘Yatra’ had brought the state to unrest. The political leaders of J&K such as Mehbooba Mufti and former J&K CM Farooq Abdullah feared that the Central Government might revoke the Article 35A. Kashmir’s residents and political parties believe that the repealing of Article 35A would change the demography of the state by allowing non-permanent residents to reside in the state.

Controversy regarding Constitutional validity of Article 35A

• In response, while the J&K Government filed a counter-affidavit and sought dismissal of the petition, the Union Government did not.

• In 2017, two Kashmiri women filed another case in Supreme Court against Article 35A for its discrimination against J&K women.

• As a response, in July 2017, Attorney General K K Venugopal told the Supreme Court that Union government was not keen on filing an affidavit in the Article 35A case, instead the government wants a 'larger debate'.

• Following this, the court referred the matter to a three-judge bench and set another date for final disposal of the case, leading to an uproar in Kashmir.

• It is feared that the scrapping of Article 35A could trigger an explosive situation in J&K.

What is Article 35A of the Indian Constitution (Appendix II)?

The Article 35A was added to the Indian Constitution (Appendix II) through a Presidential Order - The Constitution (Application to Jammu and Kashmir) Order, 1954. The order was issued by the then President Rajendra Prasad on May 14, 1954 in exercise of the powers conferred by clause (1) of Article 370.

The Presidential Order of 1954 provided framework for the division of powers between J&K and the Union Government under Article 370. If Supreme Court strikes down Article 35A, it will have serious impact on all subsequent Presidential Orders.

• Origin of Article dates back to 1927 when the Dogras from Jammu approached Maharaja Hari Singh fearing that arrival of people from Punjab will lead to their control in government services.

• These fears led to the issuance of a separate notification by the maharaja in 1927 and 1932 which defined the state subjects and their rights.

Provisions of Article 35A

• It prohibits non-permanent residents from acquiring immovable property, government jobs, scholarships and aid in the state.