Jasprit Bumrah bagged the Polly Umrigar Award, the highest award of Indian Cricket, on January 12, 2020. He received this award for the best international cricketer (2018-19) at the BCCI Annual Awards event. Bumrah made his Test debut against South Africa in 2019.

Poonam Yadav was given the Best International Cricketer (Female) Award at the same function. It is the top award from the BCCI in the women's category. Jasprit Bumrah was also given the Dilip Sardesai Award. The Polly Umrigar Trophy is given to the best male international cricketer by BCCI. 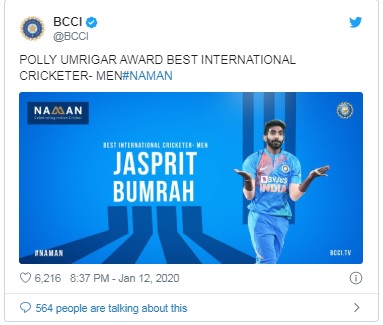 Shafali Verma was honored with the Outstanding International Debut Award in Women's Cricket. Shafali scored 222 runs in nine T20 matches last year. Apart from that, she was also honored with Jagmohan Dalmiya Award for Outstanding Performance in Junior Domestic Cricket in the 2018-19 season. She has scored a total of 1923 runs in 46 domestic matches, including seven centuries and five half-centuries including one-dayers and T20s. 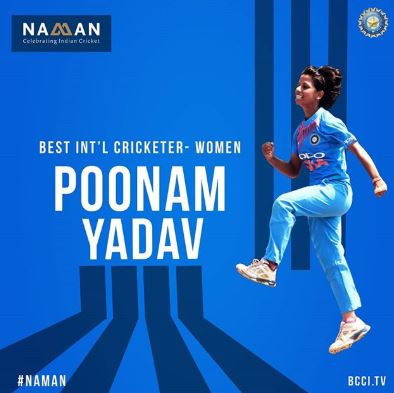 Team India’s former captain Krishnamachari Srikkanth and Anjum Chopra were awarded the Colonel CK Naidu Lifetime Achievement Award. Anjum has been a great batsman. She is also the first Indian player to play 100 ODIs. Anjum has represented India in 4 World Cups in her 17-year career.

Shivam Dube: Lala Amarnath Award For the Best All-Rounder in the Ranji Trophy