Bilkis Bano had earlier refused to accept the Rs 5 lakh as compensation and had sought exemplary compensation from the state government in a plea before the Supreme Court.

The Supreme Court directed the Gujarat Government on April 23, 2019 to give Rs 50 lakh compensation, a job and accommodation to Bilkis Bano. She was gang raped during the 2002 riots in the Gujrat. This compensation comes two years after the Bombay High court delivered justice, convicting eleven of the accused, including five Gujarat policemen and two doctors for tampering with evidence.

Bilkis Bano had earlier refused to accept the offer of Rs 5 lakh and had sought exemplary compensation from the state government in a plea before the Supreme Court.  In 2002 Gujarat riots 14 members of Bilkis' family were killed, including her two-and-half-year old daughter.

Indonesia has released a special commemorative stamp on the theme of Ramayana on April 23, 2019 to mark the 70th anniversary of establishment of its diplomatic ties with India. A specially signed version of the stamp will be on display at the Philately Museum in Jakarta.

The stamp, designed by renowned Indonesian sculptor Padmashri Bapak Nyoman Nuarta, featured a scene from Ramayana in which Jatayu valiantly fought to save Sita, said a statement issued by the Embassy of India. 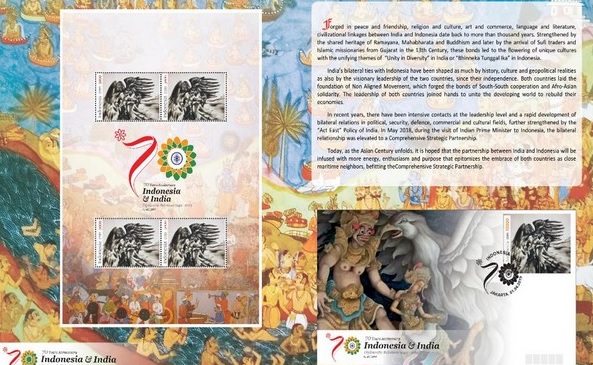 Nyoman Nuarta is an Indonesian sculptor and one of the pioneers of the New Art Movement (1976). He was born in Tabanan, Bali on November 14, 1951. He is best known through his masterpieces such as the Garuda Wisnu Kencana Statue (Badung, Bali), Jalesveva Jayamahe Monument (Surabaya), and the Indonesian Proclamation Monument (Jakarta). Nyoman Nuarta received his bachelor's degree in fine arts from the Bandung Institute of Technology and until now settled in Bandung.

Garuda Wisnu Kencana statue (also GWK statue) is a 121-meter tall statue located in Garuda Wisnu Kencana Cultural Park. It was designed by Nyoman Nuarta and inaugurated in September 2018, however construction was began on June 8, 1997. The total height of the monument, including the 46-meter base pedestal is 121 m (397 ft). The statue is about 30m higher than the Statue of Liberty, but Liberty is tall and thin, while Garuda is almost as wide as it is high, its wingspan is 64m. The statue was designed to be the Indonesia’s tallest statue, that was inspired by a Hindu myth about the search for Amrita.