CCPI 2020 was released at the 'COP 25' climate change conference in the Spanish capital Madrid.

CCPI 2020: India joins the top ten countries in this year's Climate Change Performance Index (CCPI) for the first time. This is a result of efforts made to bring down India's carbon emission. On the other hand, the United States included in the worst-performing countries for the first time.

Australia and Saudi Arabia, running their economies on the basis of coal industries, are also among the countries with high carbon emissions. The CCPI report was released at the 'COP 25' climate change conference in the Spanish capital Madrid.

The report states that the current level of per capita emissions and energy use in India ranks ninth in the higher category. However, despite high ratings for the performance of its climate policy, experts say the Indian government is yet to draw up a roadmap to reduce subsidies on fossil fuels in a phased manner. In short, more stringent laws and amendments should be made to achieve climate change targets. 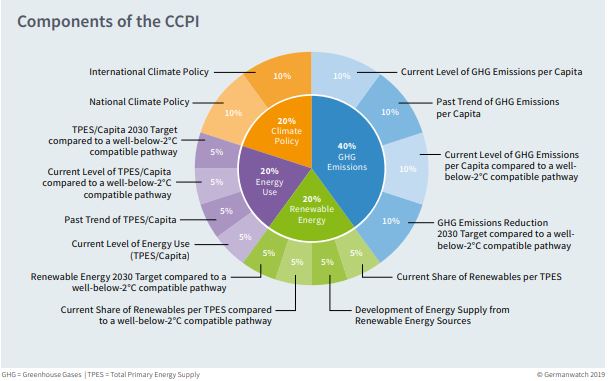 • India has made it to the top 10 countries in the Climate Change Performance Index released at the Climate Summit in Madrid.
• India ranked 9th in the index released in Madrid. The top position was bagged by Sweden while China ranked 30th.
• These rankings are given on the basis of 14 standards, which are divided into four categories.
• However, no country could meet 100% of all standards, so the first three places in this list are vacant.
• The list has been started from the fourth position, where Sweden is on the top of the list.
• Denmark improves ten ranks and moved to the second best-performing country in the 2019 list.
• The CCPI 2019 report said that Climate justice and social justice are the two sides of the same coin.

CCPI is an international observation instrument of climate protection performance by countries. CCPI aims to increase transparency in global climate politics and enables the comparability of climate protection efforts. Four categories of ranking are - Renewable Energy, Climate Policy, Energy Use, and GHG Emissions.