Charulata Patel, who was known as ‘superfan’ of the Indian cricket team, passed away on January 13, 2020. She was 87. Charulata was seen at the England stadium during World Cup 2019. She caught the attention of the sports fraternity when Virat Kohli took her blessings after the match at Edgbaston, England.

Charulata Patel's official Instagram account confirmed the news of her demise. Charulata reached the stadium and supported Team India during the World Cup in England. One of her photos went viral when Virat Kohli and Rohit Sharma had sought blessings from her.

Her official Instagram post reads that our beloved grandmother took her last breath on January 13. She was a very lovely woman, good things indeed come for a short time. She was truly exceptional. She was our world.

BCCI tweeted, “Team India's Superfan Charulata Patel Ji will always remain in our hearts and her passion for the game will keep motivating us. May her soul rest in peace.” 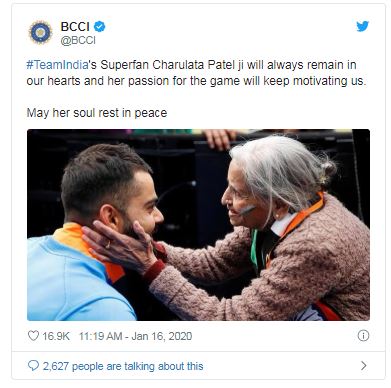 Indian Captain Virat Kohli shared some pictures of the meeting on his social media account when Charulata reached at the stadium to cheer the Indian team during the World Cup. Virat Kohli wrote that we would like to thank our fans who supported and loved us, especially Charulata Patel Ji. She is 87 years old and as far as I remember I have never seen so enthusiastic and dedicated fan.