Transparency International released the report of this index during the annual meeting of the World Economic Forum in Davos.

Corruption Perception Index: Transparency International has launched this index on January 23, 2020, based on data collected in 2019. India slipped two positions to 80th in the index while it was at 78th in the previous year’s ranking. India’s total score was 40 and managed to secure 80th rank.

Transparency International released the report of this index during the annual meeting of the World Economic Forum in Davos. Denmark and New Zealand topped the index as they are the most honest countries.

• India is in the 80th position while this rank is also shared by Benin, China, Morocco, and Ghana.
• India’s neighboring country Pakistan ranked 120 on the list. It shows more corruption in Pakistan.
• A total of 180 countries have been placed in public sector corruption cases in this index.
• The index uses a scale from 0 to 100, where score 0 indicates a highly corrupted country whereas number 100 indicates corruption-free country.
• Ghana is known as the beacon of democracy in Western Africa. It slipped to seven points from 48 in 2014 to 41 in 2019. Ghana and India are sharing the same spot in the index. 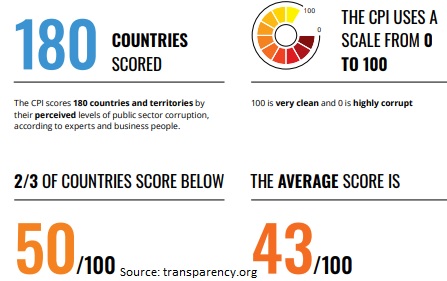 • The list of Corruption Perception Index has 180 countries. CPI provides them ranks according to the levels of public sector corruption.
• The bottom countries are Syria, South Sudan and Somalia with scores 13, 12 and 9 respectively.
• The top countries are Denmark and New Zealand (87), Finland (86), Sweden, Switzerland, and Singapore (85).
• In this year’s CPI, more than two-thirds of countries have earned a score below 50.

According to the Global Corruption Perception Index, two-third countries’ score is less than 50 and the average score is 43. Since 2012, only 22 countries have improved their scores. Estonia, Greece, and Guyana are included in this. It has also mentioned that scores of 21 countries have declined including Australia, Canada, and Nicaragua.