The President of India, Ram Nath Kovind, released National Institutional Ranking Framework -2019 (NIRF) and presented the India Rankings awards to the top eight institutions in different categories at a function held in New Delhi on April 8, 2019. He also released the Atal Ranking of Institutions on Innovation Achievements (ARIIA) and presented the ARIIA awards to the top two institutions. IIT Madras ranked on top in overall category in NIRF-2019 while Miranda House College of Delhi University ranked number one in ARIIA.

The National Institutional Ranking Framework (NIRF) was approved by the MHRD and launched by Honourable Minister of Human Resource Development on 29th September 2015. First, NIRF Ranking was issued on 4th April 2016. This framework outlines a methodology to rank institutions across the country. The methodology draws from the overall recommendations broad understanding arrived at by a Core Committee set up by MHRD, to identify the broad parameters for ranking various universities and institutions. The parameters broadly cover “Teaching, Learning and Resources,” “Research and Professional Practices,” “Graduation Outcomes,” “Outreach and Inclusivity,” and “Perception”.

UK government has released a white paper on ‘online harms’ on April 8, 2019 and claimed that these new rules would be world’s most aggressive actions to limit harmful online content. In this white paper, the UK government called for an internet regulator with the power to issue fine, to block access to websites if necessary, and to make individual executives legally liable for harmful content spread on their platforms.

UK’s Department for Digital, Culture, Media and Sport (DCMS) have proposed an independent authority that will write a "code of practice" for tech companies. ‘The Online Harms White Paper’ is a joint proposal from the DCMS and the Home Office. A 12 week public consultation will run about the papers. 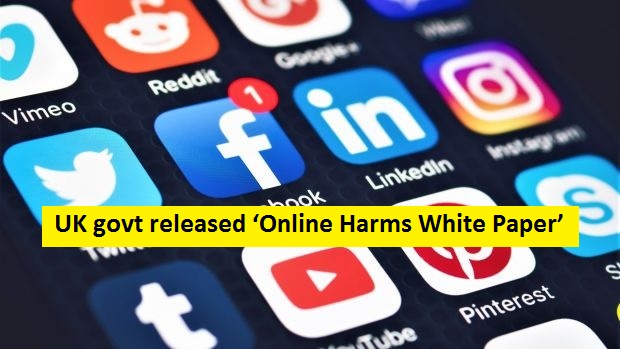