World number one Novak Djokovic will face off with defending champion Rafael Nadal in the semi-final of Men's singles in the ongoing French Open on June 11, 2021. 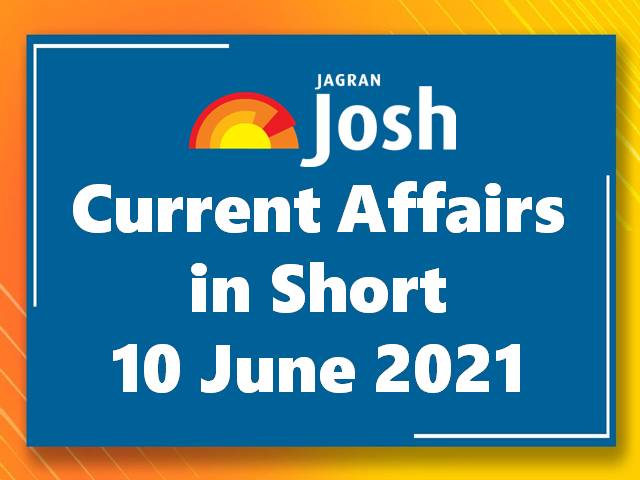 • World number one Novak Djokovic will face off with defending champion Rafael Nadal in the semi-final of Men's singles in the ongoing French Open on June 11, 2021.

• This will be the 58th time when Djokovic and Nadal lock horns and it will be their ninth face-off in Paris.

• The Kerala Cabinet has given a go-ahead for the setting up of a COVID-19 vaccine manufacturing unit at the Life Science Park at Thonnakkal, Thiruvananthapuram.

• The cabinet meeting, which was held on June 9th, also appointed IAS officer S Chithra as the director of the vaccine manufacturing project.

• A working group will be formed under the Chairmanship of Dr KP Sudheer Principal Secretary, Department of Science and Technology.

• Former India boxer and Asian Games gold medalist Dingko Singh passed away on June 10, 2021 after a prolonged illness. He was 42.

• Dingko Singh was regarded as one of the finest boxers India ever produced. He had won the gold medal at the 1998 Bangkok Asian Games.

• The late boxer had tested positive for coronavirus in May 2020 but had recovered soon. He was also undergoing treatment for liver cancer. He had to be airlifted from Imphal to the national capital for treatment in April 2020.

• Union Minister for Youth Affairs and Sports Kiren Rijiju condoled the demise of Dingko and credited the boxer for sparking a craze for the sport in India.

• The Ahmedabad administration has taken up surveillance work ahead of the potential third wave of COVID-19 and is conducting a pediatric survey to identify the most vulnerable children in order to make timely arrangements for their protection.

• The city's Health Officer Sandhya Rathod said that they have started screening children in the age group of 0-5 years with the help of 206 teams of ASHA and Anganwadi workers, who are surveying around 250 houses per day.

• Rathod stated that they are maintaining a separate list of children suffering from malnutrition and other severe diseases.

• All children have been categorised into three age groups of  0-5 years, 5-10 years and 10-15 years and their data has been collected.

• The most vulnerable children have been placed in the red category, the less vulnerable in yellow and the ones with low vulnerability in the green category.

• Legendary filmmaker and poet Buddhadeb Dasgupta passed away early in the morning on June 10, 2021. He was 77. He was suffering from kidney-related ailments.

• The National award-winning director had directed movies like 'Dooratwa', 'Grihajuddha' and 'Andhi Gali', bringing the elements of Naxalite movement on the screen. He had won the National Award five times.

• One of his famous Hindi feature films was 'Anwar Ka Ajab Kissa', a Hindi dark comedy that released in 2013 starring Nawazuddin Siddiqui in the title role, followed by Ananya Chatterjee and Pankaj Tripathi.

• Indian Prime Minister Narendra Modi expressed grief over the demise of the ace director by tweeting, "Anguished by the demise of Shri Buddhadeb Dasgupta. His diverse works struck a chord with all sections of society. He was also an eminent thinker and poet. My thoughts are with his family and several admirers in this time of grief. Om Shanti."

• President of India Ram Nath Kovind also paid condolences to Buddhadeb Dasgupta's family with a tweet that read, "Buddhadeb Dasgupta enriched our arts and culture with his world-renowned films as well as poetry - both animated by a heartfelt lyricism. In his passing away, we have lost an extraordinary artist. My condolences to the bereaved family."