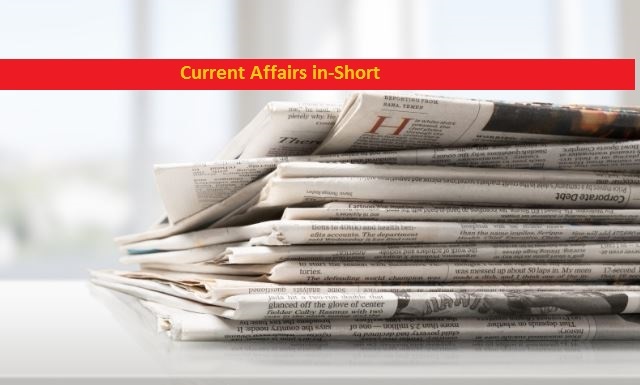 •A group of Indian researchers from Bangalore's Centre for Nano and Soft Matter Sciences (CeNS) have developed an eco-friendly smart screen from discarded groundnut shells.
•The cellulose-based smart screen has been developed by a group of researchers led by Prof S. Krishna Prasad along with Dr. Shankar Rao of CeNS. The technology will not only help in preserving privacy but also in energy conservation by controlling light and heat passing through it and reducing air conditioning load.
•According to the researchers, the device can be developed from any cellulose or agricultural waste, but the smart screen developed from groundnut waste was found to be most efficient due to certain properties of groundnut waste.
•The device can be employed for a whole range of possible applications such as energy conservation by controlling the amount and window of infrared light that is permitted to pass.

•Moody's on November 12, 2020 raised India's GDP forecast for 2020 to -8.9 percent contraction from the earlier -9.6 percent contraction forecast.
•Subsequently, Moody's has also revised India’s GDP forecast for the year 2021 to 8.6 percent from earlier 8.1 percent. The upwards revision of India’s GDP forecast is due to the falling of coronavirus cases in the country.
•Currently, India’s test positivity rate has fallen below 5 percent and fatality rates have also steadily declined in most emerging market countries, similar to the trends in advanced economies.
•In addition to this, the development of a vaccine will make the pandemic itself a less important macro factor in 2021 and 2022, stated Moody’s report.
•The Indian economy showed its biggest contraction, 24 percent year-over-year in the second quarter, due to strict national lockdown.

•Armenia has declared a no-fly zone in Armenia and Nagorno-Karabak except for military aircraft. The announcement was made by the Armenian defence ministry on November 12, 2020.
•The move comes after Armenia agreed to a ceasefire deal with Azerbaijan, which was brokered by Russia.
•Following this, thousands of protesters had gathered in Armenia’s capital, Yerevan on November 11, demanding the resignation of Armenian Prime Minister Nikol Pashinyan.

Coronavirus is not tired: WHO Chief

•We may be tired of COVID-19 but it is not tired of us, said World Health Organization chief Tedros Adhanom Ghebreyesus while addressing the Paris Peace Forum. He pointed out that European countries are struggling but the virus has not changed significantly, nor the measures to stop it.
•He further highlighted that people are becoming weary of the coronavirus pandemic but should remain vigilant and continue to take precautions while the world awaits a vaccine.
•The COVID-19 infection has so far killed more than 1.2 million people and derailed economies across the globe in these past eleven months.
•A recent resurgence in coronavirus infections has led many nations to reimpose lockdowns to contain the spread of the virus and protect their healthcare systems.

•China has adopted a new law that aims to provide better support to the country's retired military personnel. The law was adopted on November 11 by the National People's Congress (NPC) to strengthen protection over the legitimate rights of veterans.
•The law seeks the establishment of a national mechanism to ensure special preferential treatment to veterans who participated in wars. The law is expected to benefit China’s 57 million military veterans.
•The law will be brought into effect from January 1, 2021. The law has provisions for different settlement measures for demobilised military officers, soldiers and non-commissioned officers.