Rafael Nadal, a Spanish tennis player, has announced that he has decided to skip this year’s Wimbledon and the Olympic Games in Tokyo. 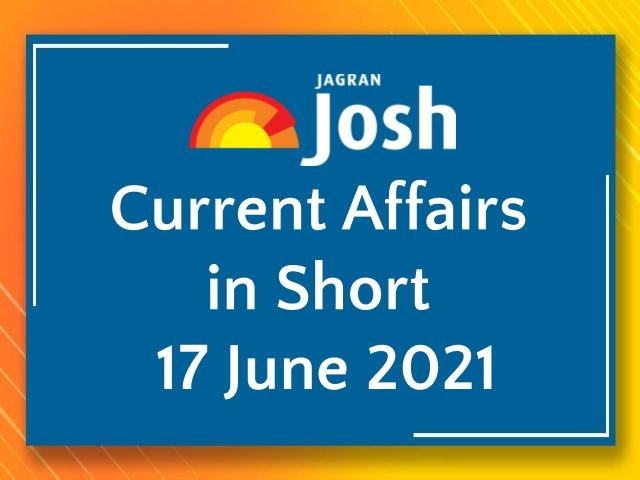 • Sputnik V, COVID-19 vaccine of Russia, will be available in 9 more cities across India. They will include Mumbai, Chennai, Bengaluru, Baddi, Vishakhapatnam, Miryalaguda, and Kolhapur.

•  The local distribution partner of the vaccine, Dr. Reddy’s also issued a statement mentioning that the project launch of the vaccine has now been extended to nine other cities. Initially, it was only in Hyderabad.

•  The pharmaceutical company had informed that the pilot launch is in its final leg and necessary arrangements are being made for the availability of both doses. The first phase of vaccine rollout by Apollo Hospital and Dr. Reddy’s started on a pilot basis on May 17 in Hyderabad and in Vishakhapatnam on May 18.

•  Reddy’s Laboratories in Hyderabad had earlier partnered with the Russian Direct Investment Fund for the rollout of the two-dose vaccine in India. RDIF had also announced that the efficacy of the vaccine is estimated to be at 94.3%.

•  The price per dose of Sputnik V at private hospitals as issued by the Central Government has been capped at Rs. 1,145.

•  Rafael Nadal, a Spanish tennis player, has announced that he has decided to skip this year’s Wimbledon and the Olympic Games in Tokyo. The 13 times French Open Champion said that his goal is to prolong his career and to compete at the highest level.

•  The Spanish Tennis star, who recently lost in the French-Open semi-final, stated that the time between Roland Garros and Wimbledon made it difficult for him to get ready for the event, hence, he has decided not to participate.

•  He added that sports prevention of any kind of excess on his body is a very significant factor at this stage of his career in order to keep fighting for the highest level of competition and titles.

•  While talking about Olympic Games, Nadal pointed that they have always been his priority as a Sportsperson. He personally had the chance to live 3 of them and also had the honour to be the flag bearer for his country.

•  Tokyo Olympics are set to begin on July 23 till August 8, 2021. The event was scheduled to be held in 2020 but was postponed due to the global pandemic.

•  The President of Sri Lanka on June 16 stated that the agreement on the Line of Credit worth $100 million between Sri Lanka and India’s Export and Import Bank has been formalized. It is a step closer to the island country’s goal of 70% renewable energy by 2030.

•  India has also become the first country to partner with Sri Lanka in its vision to ensure 70% of Sri Lanka’s national power requirements are fulfilled by renewable energy sources by 2030.

•  The two countries also discussed the striking similarities in the national objectives outlined by India and Sri Lanka in connection with Solar Energy. The shared vision in the renewable energy sector reflects common national priorities and convergence of approaches for sustainable development.

•  As per the Sri Lankan Government, strengthening collaboration in this sector will help in enhancing the overall energy partnership and will also contribute towards the global efforts of tackling climate change and reduce emissions.

•  PM Modi on June 18, 2021, will launch a ‘customized crash course’ program for the COVID-19 frontline workers. As per the official statement, the launch will be via video conferencing at 11 am in 111 training centers across 26 states.

•  The latest program aims to skill and upskill over 1 lakh, COVID-19 warriors, across India.

•  The crash course has been designed as a special program under the Central Component of Pradhan Mantri Kaushal Vikas Yojana 3.0, with a total financial outlay of Rs. 276 crores.

•  The program by the government will create skilled non-medical health care workers to fill the present and future needs of the manpower in the health sector of India.

•  The Ministry of Road Transport and Highways has written to the Principal Secretaries of Transport Departments, Director Generals of Police, and Transport Commissioners of all the States and UTs for the extension of documents related to the Motor Vehicles Act, 1998, till September 2021.

•  The enforcement authorities of the Government have been advised to treat such documents as valid till September 30, 2021.

•  This decision will facilitate the citizens in availing of the transport-related services in the country.