The Jharkhand government has announced lockdown from April 22-29 with few exemptions. Only essential services will be allowed during this period. 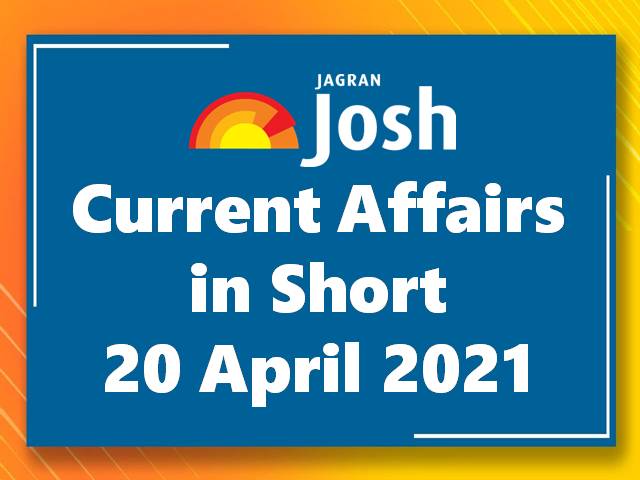 •Prime Minister Narendra Modi's upcoming visit to Portugal and France is unlikely to happen, as the coronavirus situation in the country has turned more severe with over 2.5 lakh new cases being reported every day.
•Though the visits were not officially announced by the External Affairs Ministry, all the preparations have been done for the same. PM Modi was scheduled to visit Portugal for the India-EU summit on May 8th. He is now likely to attend the summit through virtual mode.
•The Prime Minister was also scheduled to visit France later to hold bilateral talks with French President Emmanuel Macron.
•The Prime Minister has been holding back-to-back meetings with all the stakeholders in the fight against COVID-19 and keeping a close eye on the situation.

US advises citizens to avoid travelling to India, UK adds India to its travel 'red list'

•The US' Centers for Disease Control and Prevention (CDC) has advised its citizens to avoid travelling to India in the wake of the massive spike in COVID-19 cases in the country.
•The CDC said in a statement, "Because of the current situation in India even fully vaccinated travellers may be at risk for getting and spreading COVID-19 variants and should avoid all travel to India. If you must travel to India, get fully vaccinated before travel. All travellers should wear a mask, stay 6 feet from others, avoid crowds, and wash their hands."
•The CDC also stated that the fully vaccinated travellers do not have to get tested before leaving the United States unless the destination requires it and they will also not have to self-quarantine after they arrive in the United States.
•The United Kingdom has also added India to its travel "red list" on a precautionary basis. This came after the nation reported 103 cases of a coronavirus variant that was first identified in India. This means that anyone who is not a UK or Irish resident or a British citizen cannot enter the UK if they've been in India in the previous 10 days.

•Former Prime Minister and senior Congress leader Dr. Manmohan Singh has tested positive for COVID-19 and was admitted to All India Institute Of Medical Sciences (AIIMS) Trauma Centre in Delhi on April 19, 2021.
•In a letter to PM Modi on April 18, 2021, Dr. Singh had urged the Prime Minister to 'resist the temptation to look at the absolute number of vaccinations and focus on the percentage of the population vaccinated'.
•His letter had listed out suggestions for the government to fight the COVID-19 pandemic.
•Senior Congress leader Rahul Gandhi has also tested positive for COVID-19 after experiencing mild symptoms. He took to twitter to share the information and requested all those who had come in contact with him to follow safety protocols.

•Kerala state government has decided to impose a night curfew for two weeks starting from 9 pm on April 20, 2021 amid the recent surge in COVID-19 cases across the state. The decision was taken by a core committee of COVID-19 management headed by the Kerala Chief Secretary on April 19, 2021.
•During the night curfew, there will be a restriction on non-essential activities and movement at night between 9 pm and 5 am. No gatherings of any kind will also be allowed between 9 pm and 5 am.
•All essential services including medical stores, hospitals, fuel stations, media, newspaper, milk or night shift employees, goods transportation and public transportation will be exempted from the restriction.
•The Telangana state government has also announced a 10-night curfew in the state from 9 pm to 5 am from April 20th till April 30th.  During this period, all offices, shops, establishments, restaurants will close at 8 pm, except for essential services such as hospitals, diagnostic labs and pharmacies.
•The Jharkhand government has announced lockdown from April 22-29 with few exemptions. Only essential services will be allowed during this period. Though religious places will remain open but the gathering of devotees will not be allowed. Besides this, agricultural, mining & construction activities have also been permitted to continue.

•The 2021 edition of the Yonex-Sunrise India Open has been postponed due to a sudden spike in COVID-19 cases in the national capital. This was announced by Badminton Association of India (BAI) General Secretary Ajay Singhania on April 19, 2021.
•He stated that the situation in Delhi is not suitable to organise the tournament. He continued by saying that the tournament is getting canceled for the second time and added saying that it will be hosted whenever the situation gets better.
•Singhania stated that they had an entry of 228 players and close to 300 people gathering including coaches, support staff and officials.