Swedish Prime Minister Stefan Lofven was ousted on June 21, 2021 after he lost a no-confidence vote in the parliament, with a majority of parliament members voting in favour of his ouster. 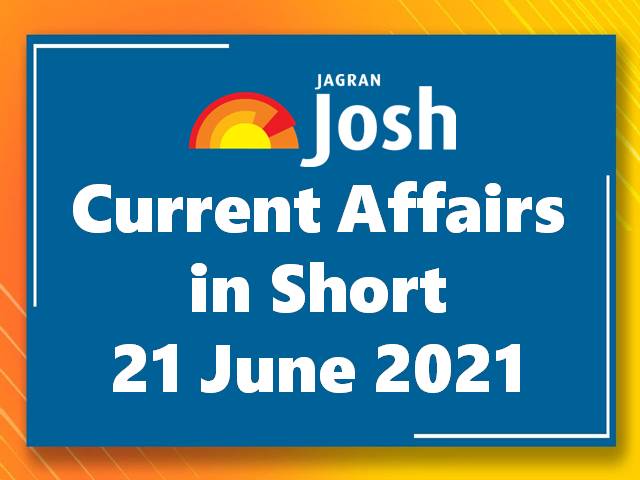 • Swedish Prime Minister Stefan Lofven was ousted on June 21, 2021 after he lost a no-confidence vote in the parliament, with a majority of parliament members backing his departure.

• The no-confidence motion against Lofven was approved by the parliament with 181 votes in favour, which is more than the required number of 175 votes in the 349-seat parliament.

• There were a total of 109 votes against the motion and 51 abstained from voting. The historic decision has dismissed Lofven's government.

• Lofven has become the first prime minister in Swedish history to be ousted by a no-confidence motion put forward by the opposition.

• The Jammu and Kashmir government has decided to cancel this year's Amarnath Yatra due to COVID-19 pandemic.

• All the traditional religious rituals will be performed at the Holy Cave Shrine as per past practice, informed the Shri Amarnath Ji Shrine Board.]=

• The Shrine Board has put in place a virtual mechanism for live Darshan of the Aarti from the holy cave. This will enable devotees to attend to morning and evening Aarti in online mode.

• Mawya Sudan, a Jammu and Kashmir resident, has become the first woman fighter pilot in the Indian Air Force (IAF) from Rajouri district.

• She has been commissioned into the Indian Air Force as Flying Officer. She has become the 12th woman officer and first from Rajouri to be inducted as a fighter pilot. She hails from Lamberi village in Rajouri.

Tokyo Olympics: 10,000 fans to be allowed for each sporting event

• Tokyo Olympics organising committee confirmed on June 21, 2021 that the spectator limit for the Olympic Games has been set at 50 percent of the venue capacity up to a maximum of 10,000 people at all venues.

• The decision was taken considering the government's restrictions on public events. The decision on the Paralympic Games is expected to be taken by July 16, a week before the opening of the Olympic Games.

• The current competition schedule will remain unchanged. The spectators will be admitted to each sporting event subject to the above limits.

Union Home Minister Amit Shah said recently that the Centre has made all arrangements to speed up the vaccination process in July and August.

The centralised free vaccination policy began on June 21, 2021, under which the centre will provide free vaccines to all citizens above 18 years of age.

The Home Minister stated that it is important to receive both doses of vaccine and urged all the citizens to come forward to get vaccinated to protect themselves from the disease.

• The Central government has informed the Supreme Court in an affidavit that it cannot pay ex gratia amount worth Rs 4 lakhs to the family members of those who died due to COVID-19 due to financial constraints.

• The Supreme Court had earlier on May 24 issued a notice to the Centre seeking direction to the concerned authorities to provide ex gratia compensation of Rs 4 lakhs to the family members of those who succumbed to the COVID-19, as per MHA letter in view of Section 12 of the Disaster Management Act, 2005.

• Responding to the notice, the centre said that the ex gratia amount cannot be paid due to financial constraints and other factors. The government, however, made it clear that it had already made payments and a lot of government measures had been introduced for the needy persons.