The Union Health Ministry on May 21, 2021 asked states near the eastern coastline to prepare themselves for Cyclone Yaas that is likely to hit by May 24. 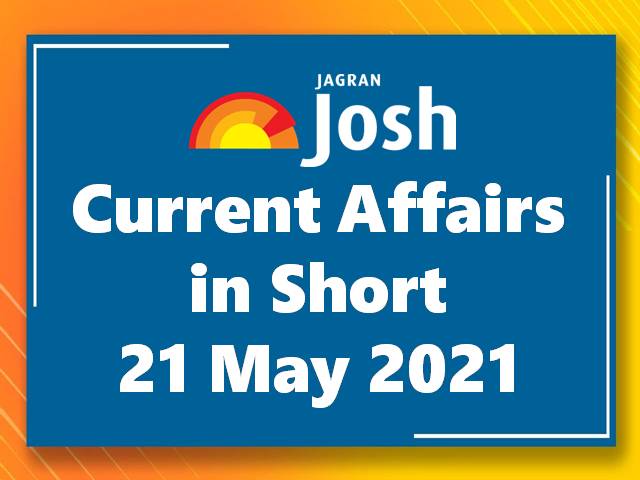 •Nepal's opposition parties led by Nepali Congress have staked claim to form the new government under former Prime Minister Sher Bahadur Deuba. They reached the official residence of President Bidya Devi Bhandari to submit their proposal.
•An alliance of political parties including Nepali Congress (NC), CPN (Maoist Center), ruling CPN-UML's Madhav Nepal faction and Upendra Yadav-faction of Janata Samajbadi Party (JSP) have claimed to have the support of 149 lawmakers in Nepal's House of Representatives.
•Nepal's President Bidya Devi Bhandari had asked the lawmakers on May 20, 2021 to stake a claim for the premiership by 5 PM on May 21st.
•The alliance has proposed the name of Nepali Congress President and Parliamentary Party Leader Sher Bahadur Deuba as their Prime Ministerial candidate to replace incumbent Prime Minister KP Sharma Oli.
•Nepal's PM KP Sharma Oli was reappointed as the Prime Minister of the nation under Article 76 (3) as the leader of the party with the highest number of members in the lower house. He had earlier on May 10, 2021 lost the trust vote.
•However, the President had reappointed Oli as the opposition parties had failed to garner enough numbers to stake claim to form the new government. Oli has to secure the vote of confidence in the house by June 14 as per the constitution to remain as Prime Minister.

•The Union Health Ministry on May 21, 2021 asked states near the eastern coastline to prepare themselves for Cyclone Yaas that is likely to hit by May 24.
•The Health Secretary, Rajesh Bhushan has written a letter to the Chief Secretaries of Odisha, West Bengal, Andhra Pradesh, Tamil Nadu and Administrator of Andaman and Nicobar Island to take immediate necessary measures, in all coastal districts to prepare for the cyclone.
•According to IMD, a low-pressure area is very likely to form over North Andaman Sea and is likely to intensify into a cyclonic storm by May 24. The cyclone is expected to move northwestwards and reach near the coasts of Odisha and West Bengal by the morning of May 26.
•There may also be widespread rains in the Andaman and Nicobar Islands and in the districts of the east coast that may cause inland flooding.

•The National Technical Advisory Group on Immunisation will soon hold a meeting to discuss vaccination for pregnant women. This comes as India has opened its COVID-19 vaccination drive for lactating mothers on May 19th.
•The meeting will take into account all the studies on the matter till date after which the Covid working group will come forward with their recommendations.
•The recommendations will then be sent to the National Expert Group on Vaccine Administration for COVID-19.

•The National Commission for Protection of Child Rights (NCPCR) has written to the health departments of states/ UTs seeking details regarding the child healthcare units such as Newborn Intensive Care Units (NICUs), Special Newborn Care Units (SNCUs) and Pediatric Intensive Care Units (PICUs).
•The commission has requested assigning of a nodal officer who would be responsible for providing data about the health facilities for the children in the concerned States/UTs.
•The commission noted tha the ongoing second wave of the COVID-19 pandemic is impacting slightly a greater number of younger people with doctors confirming that even newborns and infants are testing COVID-19 positive.
•However, so far the condition of the infants who turned positive remains under control and rarely turns fatal.
According to experts, the third wave of COVID-19 is projected to hit the country and it will affect children too.

•The Union Health Ministry wrote to states/ UTs recently listing out the best practices used by them while dealing with the COVID-19 pandemic including Rajasthan's mobile OPD, Tamil Nadu's taxi ambulance and 12 other unique initiatives.
•The Health Secretary listed many initiatives including the mobile OPD at block level to provide non-Covid essential services to villages and also the provision of "Oxygen Mitra" in each hospital to check oxygen wastage in Bikaner, Rajasthan.
•He also mentioned door-to-door testing using both RAT and RT-PCR in rural areas in Raebareli, Uttar Pradesh, which helped bring down the positivity from 38 percent to 2.8 percent in a period of one month.
•He also mentioned the use of Oxygen Nurses in Kerala to ensure rational use of Oxygen in hospitals and also the worksite Covid vaccination centres and drive through Covid vaccination centres in Gurugram, Haryana.