Pfizer has decided to provide COVID-19 vaccines in India only through government channels. This means that the vaccine may not be available in private hospitals of the country unless the centre decides to sell the doses to private facilities. 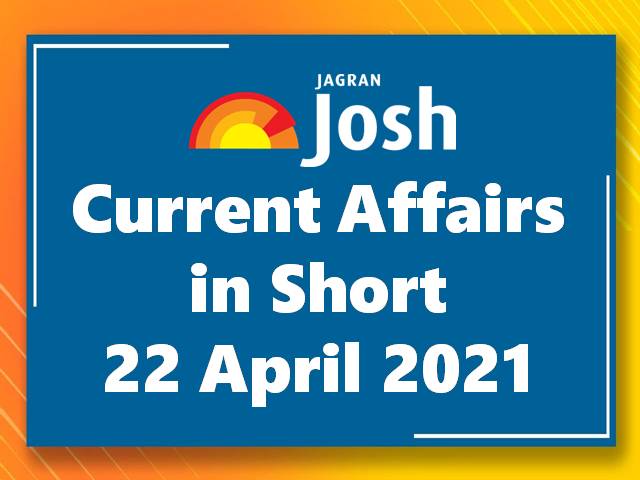 US announces to cut greenhouse emissions in half by 2030

•US President Joe Biden on April 21, 2021 announced that the United States would cut its greenhouse gas emissions by half by 2030 as part of the country's efforts to combat climate change.
•While addressing the opening of 'Leaders Summit on Climate', Biden urged world leaders accelerate their own plans to reduce greenhouse gas emissions. He said that otherwise we risk a disastrous collective failure to stop catastrophic climate change.
•He further highlighted the job creation aspect of addressing the climate crisis, suggesting he sees "an opportunity to create millions of good-paying middle-class union jobs."

•The Haryana government on April 22, 2021 allotted 140 metric tonnes (MT) of the oxygen produced in Panipat to Delhi. This comes as the hospitals in the national capital are facing acute shortage of medical oxygen.
•The move came after Delhi Chief Minister Arvind Kejriwal spoke to Haryana CM Manohar Lal Khattar to facilitate the transport of oxygen trucks from Haryana to Delhi.
•The centre has also assured the Delhi High Court that it will facilitate uninterrupted supply of 480 Metric Tonne oxygen to Delhi hospitals.

•The Indian Navy on April 22, 2021 dispatched its Deep Submergence Rescue Vessel (DSRV) from Visakhapatnam to support the search for Indonesian Navy's missing submarine KRI Nanggala, which went missing yesterday.
•The submarine has 53 crew members onboard.
•The Indian Navy had received an alert on April 21 through International Submarine Escape and Rescue Liaison Office (ISMERLO), regarding the missing Indonesian submarine.
•The submarine was reportedly exercising in a location 25 miles North of Bali with 53 personnel onboard.

•Pfizer has decided to provide COVID-19 vaccines in India only through government channels. This means that the vaccine may not be available in private hospitals of the country unless the centre decides to sell the doses to private facilities.
•The decision comes at a time when India has opened its vaccination drive for all above the age of 18 years from May 1st.
•The centre has also now allowed companies the option of charging states and private hospitals a potentially higher rate for their vaccines.