Bharat Biotech on May 24, 2021 began trials for the booster dose of Covaxin at AIIMS, Delhi and Patna. The booster trials will be conducted in phase two clinical trial participants. 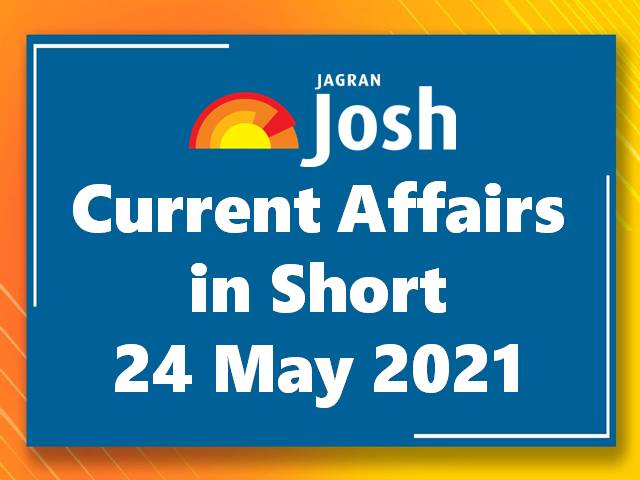 Partial Lunar eclipse on May 26th

•Indian External Affairs Minister S Jaishankar arrived in New York, the United States on May 24, 2021. He has gone to the US for a 5-day visit.
•He is expected to meet with UN Secretary-General Antonio Guterres in New York.
•He is also expected to hold discussions with his US counterpart Antony Blinken in Washington DC.
•He is also expected to meet Cabinet members and Senior Officials of Biden Administration dealing with the bilateral relationship.
•He will also have two interactions with business forums on economic and COVID-related cooperation between India and the US.

•Mount Nyiragongo erupted on May 22, 2021 in the Democratic Republic of Congo and its smoking trail of lava appeared to have stopped just a few hundred meters short of the city of Goma.
•On the day of the volcanic eruption, the sky had turned red and there was a  strong smell of sulfur in the streets of Goma city, which is home to almost 2 million people. Power outages were also reported in different locations.
•The volcano last erupted in 2002 and almost 250 people had lost their lives then with the lava destroying approximately one-fifth of city, including airport runways.

•Myanmar's ousted leader Aung San Suu Kyi appeared in the court in person on May 24, 2021 for the first time since she was put under house arrest after the military coup on February 1.
•Suu Kyi along with outsted Myanmar President Win Myint and detained chairman of the Naypyidaw Council Myo Aung met with five lawyers for 30 minutes each.
•Aung San Suu Kyi's court hearing reportedly took place at a "special court", which was set up near her house in the capital Naypyitaw between 10:30 am to 11:00 am.
•The military-appointed commission chairman Thein Soe had recently announced plans to dissolve the NLD, which is headed by former state counsellor Aung San Suu Kyi, for alleged vote fraud in general elections last year.

Bhutan not going to pressurise India for vaccines

•Bhutanese Prime Minister Lotay Tshering said on May 22, 2021 that the nation is not going to pressurise India for supply of vaccines as it is in greater need for COVID vaccines to save lives amid the deadly second wave of COVID-19 pandemic in India.
•The Bhutanese PM said that "India has assured support in the past and is a reliable friend and will give the second dose if asked but given India's greater need to save lives, Bhutan should not pressure it."
•He said that Bhutan will be approaching other countries for the second dose of AstraZeneca to vaccinate its citizens.
•India has already supplied around 5.5 lakh vaccine doses to Bhutan in two separate batches and about 80 percent adults in the Himalayan nation have been vaccinated with the first dose of Covishield.
•Bhutan had planned to fully vaccinate the entire country by the end of June. However, India's vaccine crunch in India may delay Bhutan's plan for 100 percent immunization.