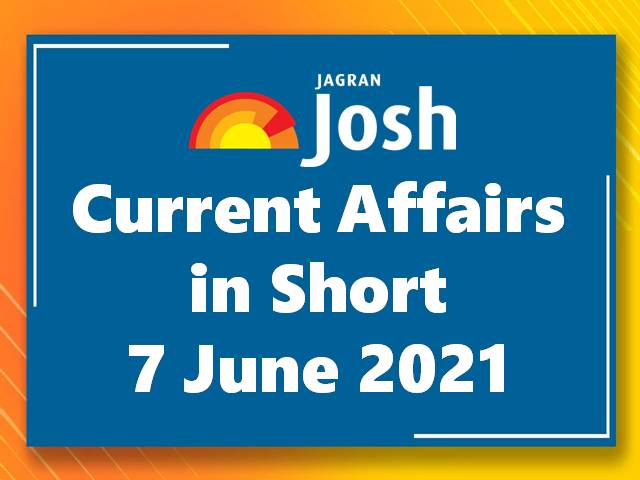 • LNJP hospital's Managing Director, Dr. Suresh Kumar said that the hospital has received a Monoclonal Antibody Cocktail-- a combination of Casirivimab and Imdevimab and has started using it.

• Dr. Kumar said that earlier patients were going to private hospitals to get this treatment but now the government has made a provision free of cost.

• Roche India and Cipla had announced the launch of the Monoclonal Antibody Cocktail in India last week. The treatment is priced at Rs 59,750 for a single dose.

• Tennis legend  Roger Federer withdrew himself from the ongoing French Open on June 6, 2021. The news has been confirmed by the tournament organisers.

• The official statement read that the Roland Garros tournament organisers have learned that Roger Federer has withdrawn from the fourth round of the tournament.

• Federer said that he decided to pull out from Roland Garros after discussions with his team. He stated that after two knee surgeries and over a year of rehabilitation, it is important that he listens to his body and make sure he does not push himself too quickly on the road to recovery.

• The Delhi government on June 6, 2021 ordered all private hospitals and nursing homes to ensure that the Covaxin doses are used only to vaccinate those people from the 18-44 age group who are eligible for receiving the second dose in June.

• The order comes days after the Delhi High Court asked the Delhi government to consider this option to enable resuming vaccination of 18-44 age group people.

• The court had observed on June 4th that the failure to administer the second dose would compromise and frustrate the very exercise of administering the initial dose of the vaccine.

• The Central government is currently having discussions over doing away with the mandatory RT-PCR report for those passengers who have received both shots of a COVID-19 vaccine. This aims to enable hassle-free domestic air travel.

• Civil Aviation Minister Hardeep Singh Puri said that a joint team from several ministries and stakeholders, including the Health Department, are in discussion to take a final decision on allowing travelling by air without an RT-PCR test for those fully vaccinated with both doses of a COVID-19 vaccine.

• Currently, all domestic passengers have to mandatorily produce a negative RT-PCR report before travelling to some states, where active COVID-19 cases are still high.

Haryana to create 'Oxi-van' in Karnal

• Haryana Chief Minister Manohar Lal Khattar announced on June 5, 2021 that the state will be creating an 'Oxi-van' spanning 80 acres in the Karnal district for people to visit. The announcement was made on the occasion of World Environment Day.

• The Oxi-van will comprise 10 types of forests, which will serve as a very good spot to the people of Karnal. The work is expected to begin soon and it will be made open to the public in a few years.

• The Haryana Chief Minister said that the shortage of oxygen during the second wave of the COVID-19 pandemic, made them realise the importance of trees to produce oxygen for us. The Chief Minister also urged people to increase the green cover by planting more plants and trees.

• He stated that development and matters of the environment must go hand in hand.