The day’s updated quizzes cover topics such as world’s largest green railway network, most liveable city in the world and World Day Against Child Labour among others. 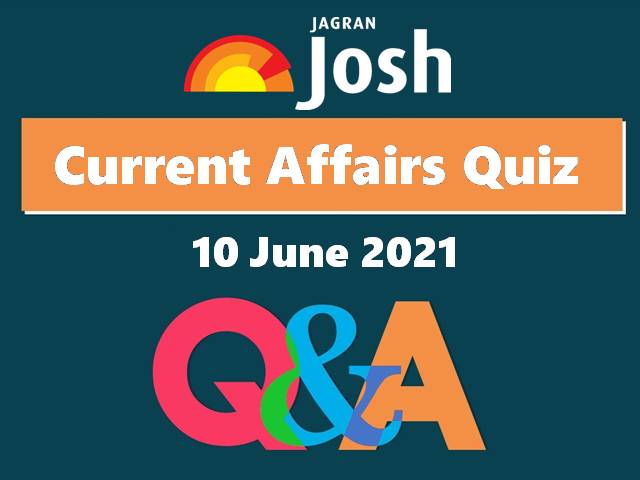 10 June 2021: The Current Affairs Quizzes section of Jagranjosh aims to help every competitive exam aspirant to revise the day at ease. The day’s updated quizzes cover topics such as world’s largest green railway network, most liveable city in the world and World Day Against Child Labour among others.

1. What is the duration of the term of the United Nations Secretary-General?

2. Which nation's railways is working to become the world’s largest green railway network?

3. Who will Novak Djokovic face in the semi-finals of the French Open?

4. Which state's cabinet has approved the setting up of the COVID-19 vaccine manufacturing unit?

5. Ace filmmaker and poet Buddhadeb Dasgupta passed away on June 10th. He had directed which among the following Hindi films?

6. Which nation has become the first country to make Bitcoin legal tender?

7. Which city was declared as the most liveable city in the world in the 2021 EIU Global Liveability Ranking?

8. When is World Day Against Child Labour?

Antonio Guterres took over as the ninth Secretary-General of the United Nations on January 1, 2017 for a term of five years. The UN Security Council voted on June 8, 2021 to grant him a second five-year term in the office.

Indian Railways is moving towards becoming the world’s largest green railway network by setting an ambitious goal of achieving “net-zero carbon emission” by 2030. The pledge comes at a crucial time when the world is facing the global issue of environmental degradation and climate change.

World number one Novak Djokovic will face off with defending champion Rafael Nadal in the semi-final of Men's singles in the ongoing French Open on June 11, 2021. This will be the 58th time when Djokovic and Nadal lock horns and it will be their ninth face-off in Paris.

Legendary filmmaker and poet Buddhadeb Dasgupta passed away early in the morning on June 10, 2021. He was 77. He was suffering from kidney-related ailments. He had won the National Award five times. One of his famous Hindi feature films was 'Anwar Ka Ajab Kissa', a Hindi dark comedy that released in 2013 starring Nawazuddin Siddiqui in the title role, followed by Ananya Chatterjee and Pankaj Tripathi.

El Salvador on June 9, 2021, became the first country in the world to grant legal tender status to Bitcoin. The El Salvador Congress approved the bill to make Bitcoin a legal tender in the country. Bitcoin is the world's largest cryptocurrency.

Auckland was declared as the most liveable city in the world on the 2021 edition of the Economist Intelligence Unit’s (EIU) annual Global Liveability Ranking. Adequate measures by New Zealand at containing the COVID-19 pandemic allowed its cities like Auckland and Wellington to re-open and enjoy a lifestyle similar to pre-pandemic life, Dutt added.

World Day Against Child Labour is observed every year on June 12, 2021. One in almost ten children across the world is in child labour. Though the number of children in child labour has declined by 94 million since 2000, the rate of reduction has slowed by two-thirds in recent years.