The day’s updated quizzes cover topics such as ESMA Act, Asian Wrestling Championships 2021, Haffkine Institute and acquisition of Cleartrip among others. 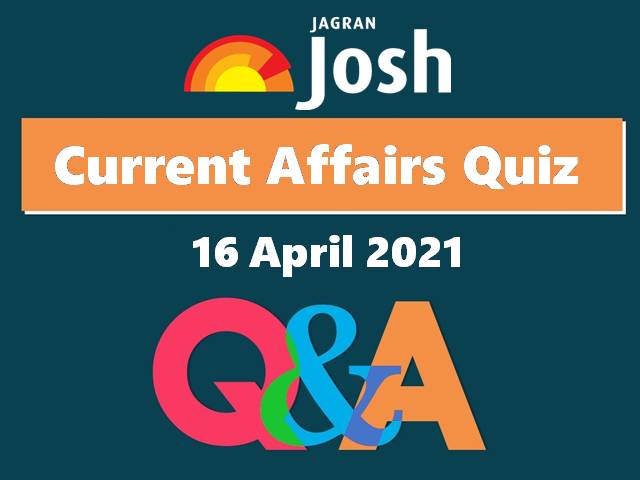 16 April 2021: The Current Affairs Quizzes section of Jagranjosh aims to help every competitive exam aspirant to revise the day at ease. The day’s updated quizzes cover topics such as ESMA Act, Asian Wrestling Championships 2021, Haffkine Institute and acquisition of Cleartrip among others.

3. Which nation is hosting the 2021 Asian Wrestling Championships?
a) Kazakhstan
b) Tajikistan
c) Kyrgyzstan
d) Japan

4. Which company will be acquiring Cleartrip travel company?
a) Flipkart
b) Amazon
c) Google
d) Facebook

6. The centre recently allowed Haffkine Institute to manufacture Covaxin. The institute is owned by which state government?
a) Kerala
b) Telangana
c) Maharashtra
d) Karnataka

7. India signed a space agreement for Gaganyaan mission on April 15, 2021 with which nation?
a) Russia
b) US
c) France
d) UK

1. (c) Chhattisgarh
The Chhattisgarh government on April 16, 2021, invoked the Essential Services Maintenance Act (ESMA) due to the surge in COVID-19 cases. The ESMA order prohibits refusal to work in essential services and it applies to all healthcare professionals including doctors, nurses and health workers across all government and private health institutions and sanitation workers.

4. (a) Flipkart
Flipkart recently announced that it is planning to acquire Cleartrip, which is a leading online travel and technology company.

5. (b) 100
The Union Health Ministry informed on April 15, 2021 that 100 new hospitals will get their own oxygen plants under the Prime Minister’s Citizen Assistance and Relief in Emergency Situations (PM-CARES) Fund.

6. (c) Maharashtra
The centre has allowed Maharashtra-government owned Haffkine Institute to manufacture Bharat Biotech's Covaxin, on the basis of transfer of technology.

8. (c) April 22nds
The National Aeronautics and Space Administration is scheduled to launch the second crewed operational flight of Crew Dragon Spacecraft ( SpaceX Crew 2) on April 22, 2021, on the occasion of World Earth Day.