The day’s updated quizzes cover topics such as Delta COVID-19 variant, world's first wooden satellite and land restoration in India among others. 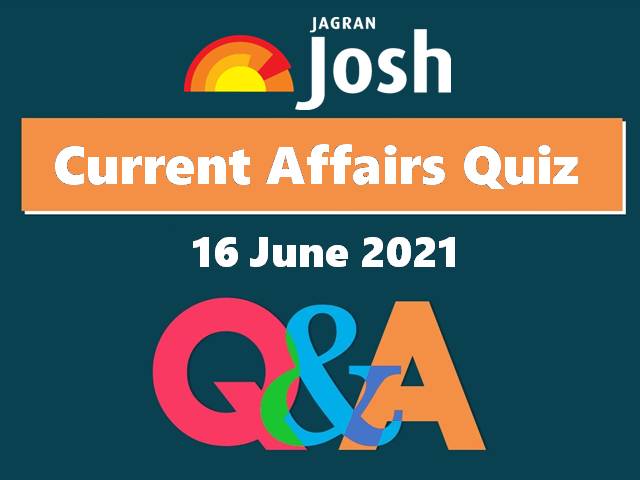 16 June 2021: The Current Affairs Quizzes section of Jagranjosh aims to help every competitive exam aspirant to revise the day at ease. The day’s updated quizzes cover topics such as Delta COVID-19 variant, world's first wooden satellite and land restoration in India among others.

1. India aims to restore how much of degraded land by 2030, as per PM Narendra Modi?

2. Which vaccine is reportedly more effective against 'Delta' COVID-19 variant?

3. Which state government has decided to train 5,000 youths as health assistants for possible third wave of COVID-19?

4. Which state has decided to set up its own series of annual awards similar to Bharat Ratna?

5. When will the Uttar Pradesh Zila panchayat chairperson elections be held?

6. Twitter has lost its safe harbour immunity in which nation?

7. The world's first wooden satellite will be launched from which nation?

India is on track to achieve its national commitment of Land degradation neutrality, said Prime Minister Narendra Modi while delivering the keynote address at the UN “High-Level Dialogue on Desertification, Land Degradation and Drought” on June 14, 2021 through video conference. The Prime Minister informed that India aims to restore 26 million hectares of degraded land by 2030 to achieve an additional carbon sink of 2.5 to 3 billion tonnes of carbon dioxide equivalent.

The Russian Direct Investment Fund (RDIF) stated on June 15, 2-21 that its Russian Sputnik V COVID-19 vaccine is more efficient against the Delta variant of the virus than any other vaccine so far. The Delta variant, which was first identified in India, has been listed as the fourth Variant of Concern by the World Health Organization (WHO). It is believed to have led to the resurgence of COVID-19 infections in many countries, including the deadly second wave in India.

The Government of Delhi announced on June 16, 2021, that 5,000 youths will be trained as health assistants for the medical and paramedical staff in preparation in view of the possibility of a third wave of Coronavirus pandemic.

The Assam Government has decided to institute its own series of annual awards similar to Bharat Ratna and Padma awards entailing various benefits for the awardees. The decision to start its own civilian awards was taken at the state Cabinet meeting on June 8, 2021, which was headed by the Chief Minister of Assam Himanta Biswa Sarma.

The State Election Commission of Uttar Pradesh announced on June 15, 2021, that the polling for the election of Zila panchayat chairpersons will take place on July 3, 2021.

Social media giant Twitter has lost its safe harbour immunity in India over its failure of appointing statutory officers, as required by the new IT rules of the Indian Government. This means that Twitter will no longer be protected under Section 79 of the IT Act and its top executives will now be liable for all the content on its platform that is considered inflammatory or considered unlawful in nature.

The European Space Agency (ESA) has planned to put the world’s first wooden satellite, WISA Woodsat, in Earth’s orbit by the end of 2021. The satellite will be launched aboard Rocket Lab Electron rocket from the Mahia Peninsula launch complex in New Zealand. The satellite's mission will be to test the applicability of wooden materials like plywood in spacecraft structures and expose it to extreme space conditions, such as heat, cold, vacuum and radiation, for an extended period of time.