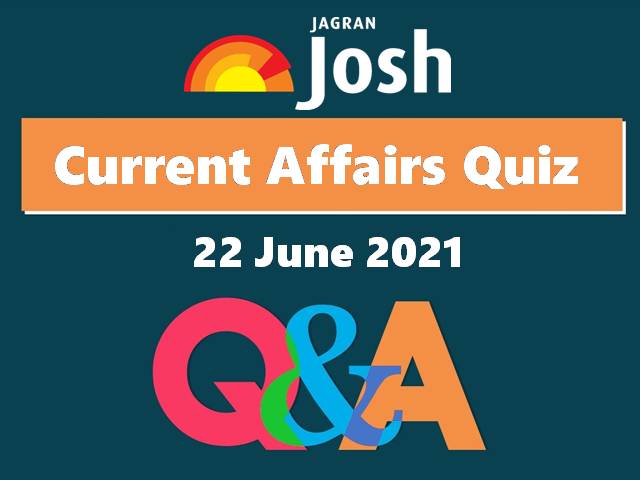 22 June 2021: The Current Affairs Quizzes section of Jagranjosh aims to help every competitive exam aspirant to revise the day at ease. The day’s updated quizzes cover topics such as  CEU Open Society Prize,  India's COVID-19 vaccination drive and Economic Advisory Council among others.

1. Which state is at the top position in India's COVID-19 vaccination drive?

2. Which state has planned to set up an Economic Advisory Council?

3. Which is the only state in India to have all three crocodile species?

4. The delimitation process is underway in which among the following states/UTs?

5. Who among the following has been named as a member of World Bank-IMF High-Level Advisory Group?

6. Who has been awarded prestigious CEU Open Society Prize for 2021?

7. Who has become the second South Africa bowler to take a hat-trick in Men's Test cricket?

Maharashtra has maintained the top position in India's COVID 19 vaccination drive by administering more than 2.8 crore doses. The state vaccinated over 3, 82,000 beneficiaries on June 21, 2021. It is the only state in the nation to have crossed the milestone of administering 2.8 crore vaccine doses.

The Tamil Nadu government has decided to set up an 'Economic Advisory Council' to the Chief Minister comprising Nobel laureates, former Reserve Bank of India governor and other economic experts from around the globe to advice the state on how to reverse the economic slowdown.

Prime Minister Narendra Modi is expected to hold an all-party meeting to discuss the delimitation process in Jammu and Kashmir in New Delhi on June 24, 2021. The discussions are speculated to involve the delimitation exercise in Jammu and Kashmir and the possible scheduling of Assembly Elections, which are expected to be held soon in the union territory.

Montek Singh Ahluwalia has been named as a member of a High-Level Advisory Group (HLAG) formed by the World Bank and International Monetary Fund (IMF) amid the dual crisis posed by climate change and the COVID-19 pandemic.

Former Health Minister of Kerala KK Shailaja was on June 17, 2021 awarded the Central European University (CEU) Open Society Prize for 2021. The University’s highest honour was given to her at a virtual convocation of the University’s 30th Graduation Ceremony that was held from Vienna.

Keshav Maharaj on June 21, 2021 became the second South Africa bowler to take a hat-trick in men's Test cricket. The spinner achieved the feat in the ongoing second Test against West Indies.