The day’s updated quizzes cover topics such as Total Lunar Eclipse, retirement of internet browser and force landing of a flight among others among others. 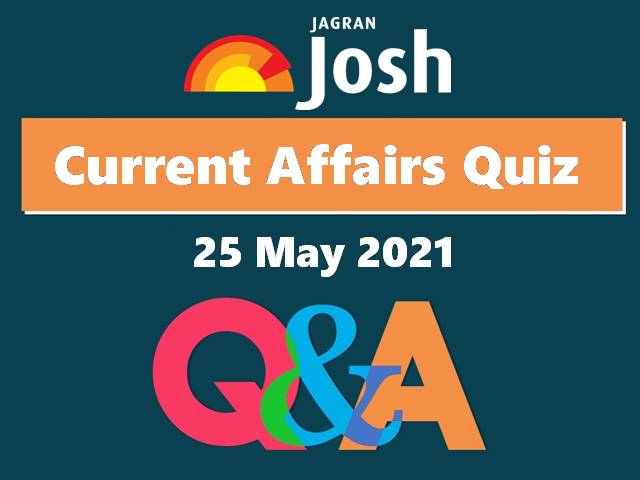 25 May 2021: The Current Affairs Quizzes section of Jagranjosh aims to help every competitive exam aspirant to revise the day at ease. The day’s updated quizzes cover topics such as Total Lunar Eclipse, retirement of internet browser and force landing of a flight among others among others.

1. Which nation will close its Kabul embassy ahead of the withdrawal of its final contingent?
a) India
b) US
c) Australia
d) France

2. The Military junta of which nation has arrested the President, Prime Minister and Defence Minister?
a) Zambia
b) Mali
c) Ethiopia
d) Eritrea

3. Which among the following vaccines does not yet feature in WHO's emergency use listing?
a) Covaxin
b) Covishield
c) Sinopharm
d) Johnson & Johnson

6. Which Indian sports federation was honoured with the prestigious Etienne Glichitch Award on May 21st?
a) All India Tennis Association
b) All India Football Federation
c) Badminton Association of India
d) Hockey India

7. Which internet browser will be retired for certain versions of Windows 10 by June 2022?
a) Mozilla Firefox
b) Internet Explorer
c) Opera
d) Google Chrome

8. Which nation has provisionally approved breathalyser test to detect COVID-19 in one minute?
a) South Korea
b) China
c) Singapore
d) UK

1. (c) Australia
Australia has planned to close its Kabul embassy in three days, ahead of the withdrawal of its final contingent of troops from Afghanistan, informed Prime Minister Scott Morrison on May 25, 2021.

2. (b) Mali
The military junta in Mali has arrested President Bah Ndaw, Prime Minister Moctar Ouane and Defence minister Souleymane Doucoure of the country's interim government following a cabinet reshuffle on May 24, 2021.

3. (a) Covaxin
Bharat Biotech is confident about obtaining the World Health Organization's (WHO) Emergency Use Listing for its COVID-19 vaccine, Covaxin. The drug manufacturer has submitted 90 percent of the documentation required for emergency use listing by the global health body.

4. (a) May 26th
A Total Lunar Eclipse will be visible on 26th May 2021 after a gap of two years. The rare celestial event would also include Super Blood Moon in which the moon turns slightly reddish-orange in colour.

5. (b) Belarus
Belarus on May 23, 2021 force landed a commercial plane Ryanair that was flying from Athens in Greece to Vilnius, the capital city of Lithuania at Minsk, capital of Belarus. Belarus President Alexander Lukashenko reportedly ordered the detour of the flight on the pretext of a bomb scare to arrest dissident Belarus journalist Roman Protasevic, who had been living in exile in Lithuania since fleeing Belarus in 2019.

6. (d) Hockey India
Hockey India was honoured prestigious Etienne Glichitch Award on May 21, 2021, for its contribution and work towards the growth and development of Hockey in India. The award was announced by the governing body of the game International Hockey Federation (FIH) during the HockeyInvites conference held virtually as part of its 47th FIH Congress.

8. (c) Singapore
Singapore authorities on May 24, 2021, provisionally approved a COVID-19 breathalyser test that determines if someone is COVID positive in less than a minute.