Cyclone Yaas: According to IMD, the system is expected to move nearly northwards and weaken gradually into a depression during the next 6 hours. 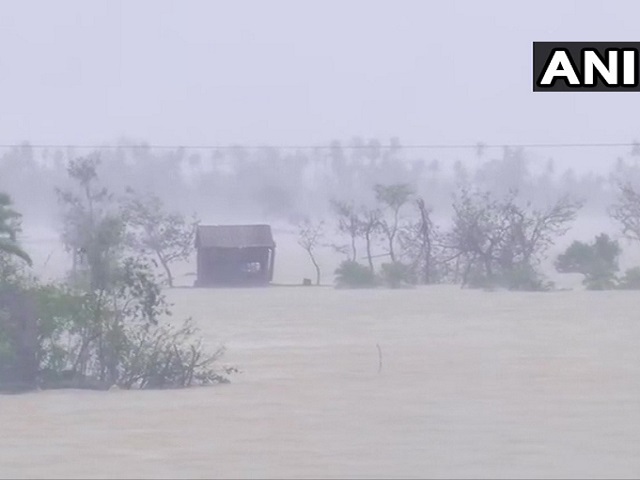 Cyclone Yaas: The deep depression over north interior Odisha and South Jharkhand has moved northwestwards with about 7 km per hour in the past 6 hours. The cyclone lay centered over South Jharkhand and the neighbourhood.

The Indian Meteorological Department informed on  May 27, 2021, that the system is expected to move nearly northwards and to weaken gradually into a depression during the next 6 hours.

The very severe cyclonic storm, Cyclone Yaas,  had begun its landfall process and took about 2 hours to complete, informed the India Meteorological Department on May 26, 2021.  It was about 30km south-southeast of Balasore. The storm's current intensity is 130-140kmph gusting to 155kmph.

According to IMD, an intense convective cloud mass has already entered Odisha's coast and the area of most intense convection is seen in the southwest sector. The water from the sea has flooded the residential areas in Dhamra of Bhadrak district in Odisha.

In West Bengal, a turbulent sea and strong winds are being witnessed in the Digha of Purba Medinipur district.

•Odisha's Balasore and Bhadrak district is expected to see the maximum impact. The location of the landfall is north of Dhamra and south of Bahanaga close to Bahanaga block on the coast, as per Odisha's Special Relief Commissioner (SRC) PK Jena.

The Indian Navy has stepped up to make all necessary arrangements for the rescue and relief operations. The Indian Army and NDRF have pre-positioned their teams and relief columns in areas expected to be affected for immediate response.

The IMD has issued the following warnings:

(i) Rainfall Warning: Heavy to very heavy rainfall is predicted at isolated places over Andaman & Nicobar Islands on May 23rd & 24th, over north coastal Odisha on May 25th and Gangetic West Bengal on May 25th-27th and Jharkhand on 26th and Bihar on 27th.

iv) Isolated Rainfall/ Duststorm: Under the influence of a Western disturbance, the IMD has predicted thunderstorm and lightning with isolated to fairly widespread rainfall over Western Himalayan Region. Isolated rainfall is also expected over plains of Northwest India during next 24 hours and isolated duststorm have been predicted over Rajasthan during next 24 hours.

v) Strong Dust Raising Winds: Besides this, strong dust raising winds have been predicted over Delhi, Haryana, Rajasthan, Uttar Pradesh and Chandigarh during the next 3 days.

The Union Home Minister Amit Shah had held a meeting with the chief ministers of Andhra Pradesh, Odisha and West Bengal and the Lieutenant Governor of Andaman and Nicobar Islands on May 24th to review preparations in view of Cyclone Yaas.

•Additionally, 13 teams are being airlifted today for deployment and 10 teams have been kept on standby.

•60 teams of Odisha Disaster Rapid Action Force are also being deployed in the State with equipment for rescue, relief and recovery.

Paradeep | 60 teams of Odisha Disaster Rapid Action Force being deployed in the State with equipment for rescue, relief & recovery, in view of cyclone Yaas

"Fishermen have been asked not to venture into the sea. We'll try to ensure there is no casualty," Additional SP, Paradeep pic.twitter.com/O71L6bNYed

•The Indian Coast Guard and the Indian Navy has also deployed ships and helicopters for relief, search and rescue operations.

•The Indian Air Force and Engineer task force units of the Indian Army, equipped with boats and rescue equipment, have been put on standby for deployment.

•The Armed Forces have begun preparations to mitigate the impact of the anticipated disaster by airlifting 950 National Disaster Response Force (NDRF) personnel across the country. At least 26 helicopters are on standby for immediate deployment.

•A total of 16 transport aircraft and 26 helicopters are on standby for immediate deployment while the Indian Navy has moved 10 HADR pallets to Bhubaneswar and Kolkata.

•While five HADR pallets are ready at Port Blair, 8 ships of Eastern Naval Command and Andaman and Nicobar Command have set off with HADR Bricks to provide succour to the people likely to be impacted.

•Besides this, 7 ships with Humanitarian Assistance and Disaster Relief Units are on standby along the Eastern coast.

•Ten relief and 4 diving columns have been pre-positioned at Kolkata, Bhubaneswar and Chilika for providing assistance to civil administration at short notice.

•Besides this, 7 seven flood relief teams and two diving teams have been deployed at different locations in Andaman and Nicobar Islands and Naval Aircraft and helicopters in Vishakhapatnam and Port Blair are on operational readiness to undertake search and rescue missions.

•All oil installations in the sea are being secured and all the shipping vessels of the Ministry of Petroleum and Natural Gas are being brought to safe harbour.

•The Union Ministry of Power has also activated its emergency response systems and is keeping its systems ready for immediate restoration of electricity in case of a power outage.

•The Telecom Ministry will be keeping a close watch on all telecom towers and is prepared to quickly restore the telecom network in case it cuts off.

•The Health Ministry has also issued an advisory to the States/UTs that are likely to be affected for preparedness and response on Covid-19 in affected areas.

•The Shipping Ministry has also taken measures to secure all shipping vessels and it has also deployed emergency vessels (Tugs) for relief and rescue operations.

•All residents from vulnerable locations or high-risk places are being evacuated with the assistance of the NDRF.

Cyclone Yaas is the second tropical cyclonic that is expected to hit India in less than a week. Cyclone Tauktae, another tropical system had been brewing earlier in the Indian Ocean and had lashed across India's western side and caused heavy damage in states like Goa, Maharashtra and Gujarat last week.