Defence Minister Nirmala Sitharaman has commissioned INS Kiltan, an indigenously-built anti-submarine warfare. It is India's first major warship to have a superstructure of carbon fibre composite material. It was commissioned at the Naval Dockyard in Visakhapatnam. 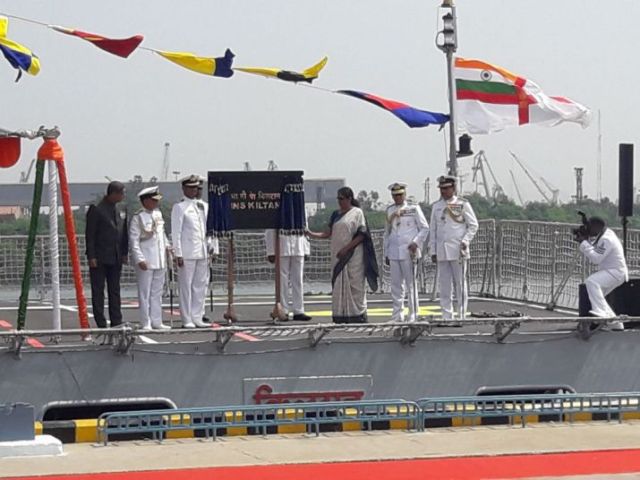 INS Kiltan is a stealth corvette that portrays growing capability of the Indian Navy. The commissioning ceremony was attended by Chief of the Naval Staff Admiral Sunil Lanba and a host of other dignitaries.

The warship is an extension of Prime Minister Narendra Modi’s ‘Make in India’ initiative.

• INS Kiltan was commissioned at the Naval Dockyard in Visakhapatnam.

• It is an addition to indigenous warships after Shivalik Class, Kolkata Class and sister ships INS Kamorta and INS Kadmatt.

• It is the third of the four Kamorta-class corvettes being built under Project 28.

• It is designed by the Indian Navy's in-house organisation, Directorate of Naval Design.

• It is built by Garden Reach Shipbuilders & Engineers in Kolkata.

• It is India's first major warship to have a superstructure of carbon fibre composite material. This helps in an improved stealth features, lower top weight and maintenance costs.

• It is well equipped to fight in Nuclear, Biological and Chemical (NBC) warfare conditions.

• The ship derives its name from one of the islands in Aminidivi group of the strategically located Lakshadweep and Minicoy group of islands.

• It also shares its name with the former Petya Class ship of same name ‘Kiltan (P79)’, which had played a major role as the Task Force Commander in ‘Operation Trident’ during 1971 Indo-Pak war.

• The Kamorta-class corvettes or Project 28 are a class of anti-submarine warfare corvettes currently in service with the Indian Navy.

• They are the first anti-submarine warfare stealth corvettes to be built in India.

• The project was approved in 2003, with construction of the lead ship, INS Kamorta starting in August 2005.

• INS Kiltan is the third of the four Kamorta-class corvettes being built under Project 28.

• Two among the four corvettes-INS Kamorta and INS Kadmatt - were commissioned in 2014 and 2016 respectively.

• The fourth, INS Kavaratti is still under construction and slated to be completed by end of 2017.