6 Apache attack helicopters will be purchased at an expense of around 4168 crore rupees. 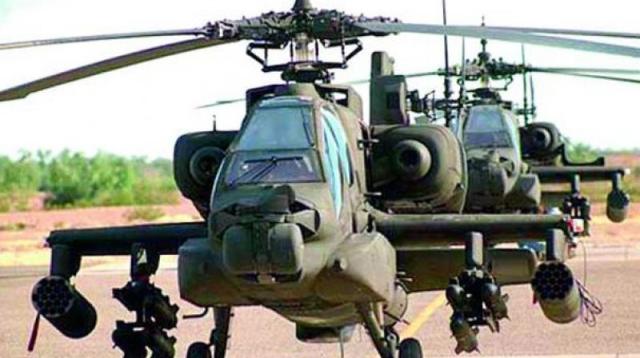 Defence Ministry on 17 August 2017 cleared a proposal to procure 6 Apache attack helicopters for Army. The acquisition of the helicopters, equipment and training will cost around four thousand 168 crore rupees.

The approved proposal is different from India’s purchase of 22 Apache and 15 Chinook helicopters from Boeing in 2015 for Rs 13 952 crores for the Air Force.

Reports also suggest that the helicopters are being bought under an option clause of 50 percent repeat order in the previous deal under which 22 Apache attack choppers were bought for the IAF. The deadline for using the option clause is to end on 28 September 2017.

These Apache AH-64E choppers will come with associated equipment that includes spares, training, weapons and ammunition. The Boeing AH-64 Apache helicopter is the most advanced multi-role heavy attack helicopter in the world and they carry advanced weapons systems and night-fighting features.

The DAC has also approved a proposal to procure two gas turbine engines for Admiral Grigorovich class naval ships at a cost of Rs 490 crore. The gas turbines will be procured from Ukraine and the ships are being made in Russia for India.

In October 2016, the two nations, namely India and Russia, signed an inter-governmental agreement for four frigates through a partnership between Indian and Russian shipyards. The agreement was signed during Russian President Vladimir Putin’s visit to India.

As per the agreement, the two frigates will come from Russia; while the other two will be constructed at an Indian shipyard with Russian cooperation.

Debate on demand of attack Helicopters

Earlier, the Indian Army has demanded its own fleet of attack helicopters but the demand came into a debate when the Indian Air Force (IAF) displayed its displeasure over Army’s proposal. IAF opposed the proposal by highlighting a Joint Army Air Instruction (JAAI) of 1986, that says that the IAF would operate helicopters of all kinds and Army’s charter was limited to light utility helicopters.

Reports also suggest that opposing the proposal, IAF said that creation of a separate mini-Air wing by the Army would reduce its role.

Till now, the Army does not have any attack helicopter.

About Army’s proposal for attack helicopters

The Indian Army came up with the proposal demanding attack choppers for its personnel after the government in 2015 finalized the deal for 22 Apache helicopters for the Indian Air Force. The Army had been pushing for 11 choppers for it by saying that the ground forces need them after considering the changing security scenario in the region.

Comment: The Apache attack helicopters will strengthen the Army’s capability to carry out combat operations in border areas.