For the study, the team used a computer model to understand how earth's conditions might have looked at the end of the Cretaceous Period. 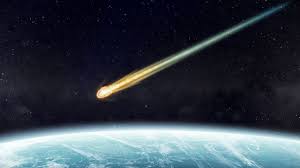 A new research has suggested that an asteroid that eliminated dinosaurs 66 million years ago would have also pushed earth into darkness for nearly two years.

As per the study, the 10-km-wide asteroid attack caused global wildfires that released tremendous amounts of soot in the atmosphere, which absorbed light and potentially blocked the process of photosynthesis for more than a year-and-a-half.

For the study, the team used a computer model to understand how earth's conditions might have looked at the end of the Cretaceous Period.

The study was published recently in the journal Proceedings of the National Academy of Sciences.

• As per the study, the asteroid attack dramatically changed the climate of earth, i.e., cooling the surface and heating the upper atmosphere that had potentially devastating effects.

• The attack also contributed to the mass extinction that marked the end of the age of dinosaurs.

• Scientists estimate that more than three-quarters of all species on earth, including all non-avian dinosaurs, disappeared at the boundary of the Cretaceous-Paleogene periods, an event known as the K-Pg extinction.

• The study also stated that the collision would have triggered earthquakes, tsunamis and even volcanic eruptions.

• As per the lead researcher Charles Bardeen, scientist at the US National Center for Atmospheric Research (NCAR), "The extinction of many of the large animals on land could have been caused by the immediate aftermath of the impact but animals that lived in the oceans or those that could burrow underground or slip underwater temporarily could have survived.

• The findings could be useful for other types of studies, including modelling a "nuclear winter" scenario.