Explained: How is COVID-19 detected in RT-PCR Test?

What is RT-PRC Test? What does RT-PCR stand for and how exactly does the test work to detect COVID-19 SARS-CoV-2. Let’s decode the science behind it.

COVID-19 RT-PCR Test Explained: With the 2nd Wave of COVID-19 sweeping across the country, the demand for RT-PCR Tests which can detect the virus early and aid in timely treatment of infected persons has become pivotal. While, many have undergone RT-PCR Test in the last year, but rarely do people know and understand the science behind it! What is RT-PRC Test? What does RT-PCR stand for and how exactly does the test work to detect COVID-19 SARS-CoV-2. Let’s decode the science behind it.

What is RT-PCR Test?

Scientifically speaking, the Real-Time RT-PCR is an innovative nuclear-derived testing method that is widely used to detect the presence of specific genetic material in any pathogen, including a virus. During its nascent phase, the testing methodology involved using radioactive isotope markers to detect the genetic material. Using the radioactive isotopes was slow and cumbersome as the test results would be available only at the end of the process. However, over the years, the technology has evolved further and the radioactive isotope markers have now been replaced with special markers, which in most cases are fluorescent dyes, which gives results almost immediately, even when the process is still underway.

When it comes to testing for viruses, RT-PCR is considered to be one of the best methodologies available to us. Apart from COVID-19’s SARS-CoV-2 virus, this test is also widely used to test for other virus based disease including Ebola virus and Zika virus

What is a virus and its genetic material?

Before moving on to understanding how does RT-PCR Test work to detect SARS-CoV-2 virus, it is time to refresh some Elementary School-level Biology and knowing what actually a virus is and what its composition is. The simplest definition which explains a virus is that “A virus is a microscopic package of genetic material surrounded by a molecular envelope. This genetic material can be either deoxyribonucleic acid (DNA) or ribonucleic acid (RNA).” 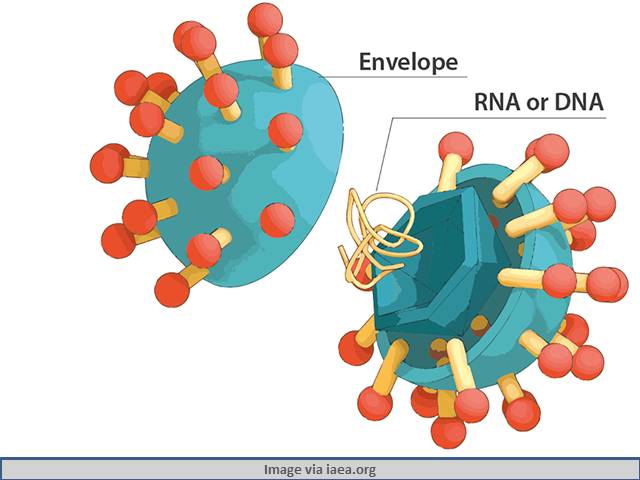 Now, a virus basically consists of a protein shell inside which there is microscopic amount of DNA or RNA genetic material. The modus operandi off any virus involves entering the host (human body), attaching itself to the host body’s cells with the help of protein shell and then releasing genetic material inside the cell, wherein it is replicated. The replicated virus then goes onto infects other healthy cells of our body and makes us fall sick.

One last bit of Biology lesson that is needed for our discussion is about RNA and DNA. DNA stands for Deoxyribonucleic acid, which is a two-stand molecule that carries the genetic code, or blueprint, for how these organisms are made and develop. Mostly, all organisms carry DNA Molecules. On the other hand, RNA stands for Ribonucleic acid (RNA) a one-strand molecule that copies, transcribes and transmits parts of the genetic code to proteins to the host body.

The SARS-CoV-2 Virus is RNA based virus and therefore it infiltrates healthy cells and uses them to multiply and survive. Once inside the cell, the virus uses its own genetic code — RNA in the case of the COVID-19 virus — to take control of and ‘reprogramme’ the cells, turning them into virus-making factories.

What is Revere Transcription?

The RT in the RT-PCR test stands for Reverse Transcription and it an important step in the testing process because of SARS-CoV-2 Virus is RNA based virus. To detect presence of COVID-19 virus in a human body, scientists need to convert the RNA to DNA. This is a process called ‘reverse transcription’. The Revere Transcription of RNA to DNA is carried out because under laboratory conditions, only DNA can be copied or amplified, which is important for the detection of COVID-19 virus.

In order to detect the virus in human body, laboratories amplify a specific part of the transcribed viral DNA hundreds of thousands of times. This is done so that we don’t have to look for a small trace of virus RNA but instead large amount of infected DNA stands are identifies, which helps in early detection of the virus.

PS: Some facts and scientific processes explained above have been ‘over-simplified’ to help a common person understand a very complex scientific testing process. The intention is to evolve a general understand of the concept rather than provide every small detail, very specifically.