Fourth Phase of polling being held in West Bengal

Under the phase, 44 assembly constituencies across five districts -Howrah, Hoogly, Cooch Behar, South 24 Parganas and Alipurduar- have gone to polls. 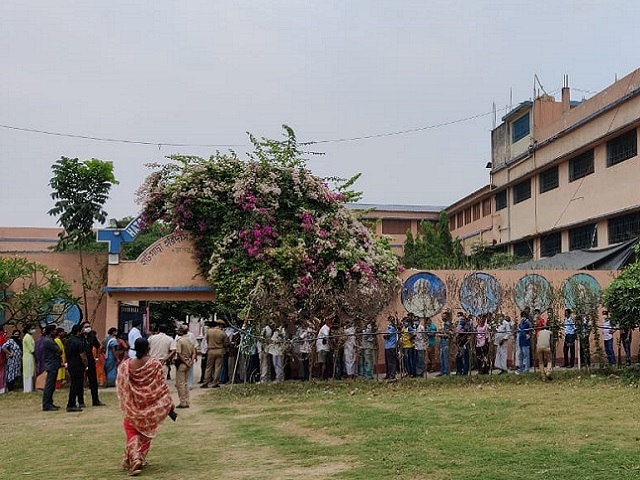 The voting for the fourth phase of elections began in West Bengal at 7 am on April 10, 2021. Under the phase, 44 assembly constituencies across five districts -Howrah, Hoogly, Cooch Behar, South 24 Parganas and Alipurduar- have gone to polls. Around 373 candidates are in the fray this time including some high-profile candidates.

West Bengal Assembly Elections 2021 are being conducted in eight phases and result will be declared on May 2nd along with three other states and one union territory- Kerala, Tamil Nadu, Assam and Puducherry. The polling in all the other states is over.

West Bengal: A security personnel helps a woman voter get to a polling station in Alipurduar, as the fourth phase of Assembly elections are underway pic.twitter.com/50Z9jAMjYc

Voting for the fourth phase of the State's Assembly elections is underway today. pic.twitter.com/PSFmLVyAON

•Among the total 44 constituencies, 11 fall in South 24 Parganas, 10 in Hooghly, 9 in Howrah district, 9 in Cooch Behar and 5 in Alipurduar.

•The largest constituency going to polls under this phase is Chunchura with 3,13,701 electorates and the smallest is Bally with 1,76,001 electorates.

•The security has been tightened in all the 44 constituencies with the deployment of a total of 900 companies of security forces to ensure a peaceful election.

1. Tollygunge constituency- The BJP has fielded Union Minister Babul Supriyo against sitting TMC MLA Aroop Biswas, who has been representing the constituency for the last three terms. Samajwadi Party MP Jaya Bachchan was one of the high-profile campaigners for the TMC candidate. The CPI(M) has fielded Debdut Ghosh from the seat.

People queue up to cast their votes for the fourth phase of #WestBengalElections2021. Visuals from Bhetaguri Lal Bahadur Shastri High School, designated as a polling booth, in Dinhata of Cooch Behar district. pic.twitter.com/iwhhz5fhw5

Voting process is underway for the fourth phase of #WestBengalElections2021. Visuals from a polling station in Alipurduar. pic.twitter.com/7FW4TPR65Z

The West Bengal Assembly Elections 2021 is witnessing a strong face-off between two major parties -the BJP and ruling TMC. The third major player is the coalition of the Left, Congress and Indian Secular Front (ISF), which has presented itself under the name 'Sanjukta Morcha'.

The fifth phase of the West Bengal Assembly elections will start from April 17. The counting of votes will take place on May 2nd.