All G7 leaders, for the first time, also agreed to align their long-term and short-term climate goals in a manner that keeps the 1.5 degrees Celsius global warming threshold within reach. 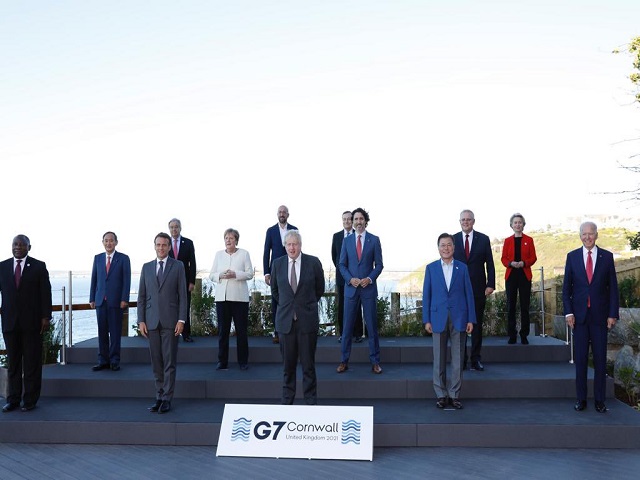 During the summit, the first in-person meeting of the G-7 leaders after the outbreak of COVID-19, the G7 leaders agreed to a set of concrete actions to accelerate the global transition away from coal generation as part of efforts to combat the climate crisis.

Prime Minister Narendra Modi participated in two outreach sessions of the G7 Summit through virtual mode on climate change and open societies. He shared that India is the only G20 country on track to meet its Paris commitments.

The G7 Summit 2021 Theme was 'Build Back Better' and the G7 leaders agreed on a shared vision to #BuildBackBetter for:

G7 leaders have agreed on a shared vision to #BuildBackBetter for:

• All G7 leaders, for the first time, also agreed to align their long-term and short-term climate goals in a manner that keeps the 1.5 degrees Celsius global warming threshold within reach.

• They signed a landmark joint commitment to net-zero emissions by 2050 (latest) and keeping a 1.5°C temperature rise within reach.

• The leaders also resolved to strengthen adaptation and resilience to protect people from the impacts of climate change and halt and reverse biodiversity loss and mobilise finance and leverage innovation to reach these goals.

We need to decarbonise the energy sector.

The @G7 agreement to end global coal finance is a great achievement and sends a strong message to the world.

• US President Joe Biden committed to advance policies domestically that will achieve carbon-pollution-free energy in electricity generation by 2035.

• The joint efforts by the US, UK, Canada and Germany will include a new collective commitment to provide up to USD 2 billion to support the Climate Investments Funds focused on accelerating the transition from coal for key developing countries while investing in technology, job training and infrastructure etc

• The world leaders will also be launching the G7 Industrial Decarbonization Agenda, which is a first-of-its-kind platform that will aim to accelerate innovation, deploy decarbonisation technology and harmonise standards.

• They will also emphasise sectoral decarbonisation in power, transport, agriculture, and buildings.

Our views, values and interests are aligned.

The green and digital transition is our priority - and above all our responsibility. pic.twitter.com/l8bKt64gTz

• G7 leaders also launched the 'Build Back Better World' (B3W) partnership to meet the infrastructure needs of low and middle-income countries as part of efforts to counter China's Belt and Road Initiative (BRI).

• The leaders have decided to launch a democratic alternative to the Belt and Road Initiative and have agreed to put together a committee for the same.

• The initiative will give developing countries access to more, better and faster financing for vital green infrastructure projects.

G7 has agreed to launch a democratic alternative to Belt and Road Initiative. They (G7 countries) have agreed to that, that's underway -- details of that. We agreed to put together a committee to do that: US President Joe Biden after attending G7 Summit

• The scope of the initiative will range from Latin America and the Caribbean to Africa to the Indo-Pacific.

• The G7 leaders explicitly agreed to call out the human rights abuses in China's Xinjiang region and Hong Kong.

• They pledged to promote shared values by calling on China to respect human rights and fundamental freedoms in Xinjiang, where it is accused of committing serious human rights abuses on the minority Uyghur Muslim community and in the semi-autonomous city of Hong Kong.

• The G7 leaders stated in the Carbis Bay communique that they recognise the particular responsibility of the largest countries and economies in upholding the rules-based international system and international law.

• With regard to China and competition in the global economy, the leaders said that they will continue to consult on collective approaches to challenging non-market policies and practices which undermine the fair and transparent operation of the global economy.

• At the same time, they will promote their values, including by calling on China to respect human rights and fundamental freedoms, especially in relation to Xinjiang and freedoms and high degree of autonomy for Hong Kong enshrined in the Sino-British Joint Declaration and the Basic Law.

All the G7 leaders along with guest countries India, Australia, South Korea and South Africa pledged to:

-Promote shared values as open societies in the international system

-Recognise the need for action on corruption

The leaders also spoke about the conflict situations in Ukraine, Belarus, Ethiopia, Chad, Mali and Afghanistan.

In Afghanistan, they noted that a sustainable, inclusive political settlement is the only way to achieve a just and durable peace that benefits all Afghans.

The leaders reiterated their support to the Afghan government to address the country's urgent security and humanitarian needs and to help the people of Afghanistan, including women, young people and minority groups, as they seek to preserve hard-won rights and freedoms.

G7 call for probe into origins of COVID-19

• All G7 leaders have called for a "timely, transparent, expert-led, and science-based WHO-convened" investigation into the origins of COVID-19, including in China, as recommended by the experts' report.

• The leaders, in the Carbis Bay communique, stressed on strengthening transparency and accountability. They also reiterated their commitment to the full implementation of the International Health Regulations 2005.

• This includes investigating and reporting about outbreaks of unknown origin.

• They also called for a timely, transparent, expert-led, and science-based WHO-convened Phase-2 COVID-19 Origins study including in China.

• The origin of COVID-19 is a mystery even now, after over 1.5 years since the first case of infection was reported in China's Wuhan city.

• The G7 Summit nations have pledged to provide at least 1 billion coronavirus vaccine doses to the world through dose sharing and financing during the summit. The United States will be providing about half of those doses.

I’m very pleased to announce that @G7 leaders have pledged over 1 billion doses to the world’s poorest countries – another big step towards vaccinating the world.

This weekend the @G7 came together. And together we are building back better, greener and fairer from the pandemic. pic.twitter.com/ENpgnIpTj3

• The UK PM Boris Johnson also pledged to donate about 100 million surplus coronavirus vaccine doses to the world within the next year.

• Among these, 5 million COVID-19 vaccine doses will be made available by the end of September for use in the world’s poorest countries. These vaccine doses are expected to meet the immediate demand for vaccines in the countries worst affected by coronavirus without delaying the completion of their initial domestic vaccination programme.

• The remaining 95 million doses will be made available within the next year, including 25 million by the end of 2021. Around 80 percent of these 100 million vaccine doses will go to COVAX and the remainder will be shared bilaterally with countries in

• P Harish further stated that this was the first time that India was engaged in ministerial & working-level tracks as a guest country.

• He said that India's engagement was fruitful, productive that he hopes to take forward the engagement in various initiatives including in the run up to COP26.

Our engagement was fruitful, productive & we hope to take forward our engagement in various initiatives including in the run up to COP26: P Harish, Additional Secretary (Economic Relations) MEA

• PM Modi spoke in 2 sessions on climate change and open societies. On climate change, the Prime Minister called for collective action, recognizing that this challenge can't be protected or addressed by countries acting in silos.

PM Modi today spoke in 2 sessions on climate change & open societies. On climate change, PM called for collective action, recognizing that this challenge can't be addressed in silos. He shared that India is the only G20 country on track to meet its Paris commitments: MEA

• He also shared that India is the only G20 country on track to meet its Paris commitments.

Also participated in the @G7 session on Climate and reiterated India's strong commitment to climate action. India is the only G20 country on track to meet its Paris Commitments. And Indian Railways is committed to "Net Zero" by 2030.

• The Prime Minister further highlighted the need for open and democratic societies to work together and strengthen each others' hands to defend the value that they hold dear and to respond to the increasing challenges.

• PM Modi also called for the reform of the multilateral system as the best signal of commitment to the cause of Open Societies.

• PM Modi further sought the strong support of the G7 leaders for India and South Africa's proposal for a TRIPS waiver at WTO. His call was strongly echoed by South African President Cyril Ramaphosa.

• This was the second time that PM Modi participated in a G7 meeting since 2014. India had earlier been invited by France to participate in the 2019 G7 Summit as a “Goodwill Partner”.

• The United States had also invited India to attend the G7 Summit in 2020 under its Presidency. But the summit did not happen due to the COVID-19 pandemic and the outcome of the US Elections.

• Before 2014, India attended the G8 Summit five times. However, G8 became G7 again in March 2014 after the suspension of Russia following its annexation of Crimea in Ukraine.