Gauri Lankesh, activist-journalist from Karnataka, who was shot dead in September 2017, will be posthumously conferred the Anna Politkovskaya Award 2017. She would be sharing the award with a Pakistani peace activist, Gulalai Ismail, who has faced death threats for speaking out against the Taliban. 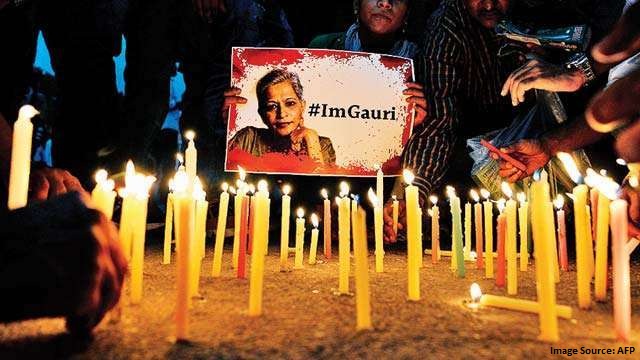 Gauri Lankesh, activist-journalist from Karnataka, who was shot dead in September 2017, will be posthumously conferred the Reach All Women in WAR (RAW in WAR) Anna Politkovskaya Award 2017.

With this, the journalist becomes the first-ever Indian to receive the honour. She would be sharing the award with a Pakistani peace activist, Gulalai Ismail, who has faced death threats for speaking out against the Taliban.

• She was the founder-editor of the Gauri Lankesh Patrike.

• Lankesh also worked as an editor in Lankesh Patrike, a Kannada weekly started by her father P Lankesh.

• She was known to be an anti-establishment voice and a strident critic of religious extremism.

• She was fired at outside her home in Bengaluru on the evening of 5 September 2017.

• Her assassination came days after the second anniversary of the killing of Kannada writer and rationalist MM Kalburgi, who was similarly shot dead outside his residence at Dharwad in north Karnataka in August 2015.

• The prestigious annual global award was instituted in the memory of a Russian investigative reporter and political activist, Anna Politkovskaya.

• Politkovskaya was assassinated in Moscow at the age of 48 on 7 October 2006 to silence her courageous reporting about the second war in Chechnya province of Russia and for exposing corruption.

• The award is conferred annually by a London-based non-governmental organisation RAW in WAR (Reach All Women in War). The organisation supports women human rights defenders and victims of war.

• The award aims to honour those women, who work towards upholding the human dignity, especially of women and children in conflict zones, often at great personal risk.

• In 2016, to mark the tenth anniversary of the prize, an additional special award was instituted to honour someone from Russia who, like Anna Politkovskaya, has worked to build peace in conflict zones and help civilians trapped between opposing armed forces.

• This year marks the 11th anniversary of killing of Anna Politkovskaya.