Kamaladevi was considered as the driving force behind the renaissance of Indian handicrafts, handlooms and theatre in the post-independence era. 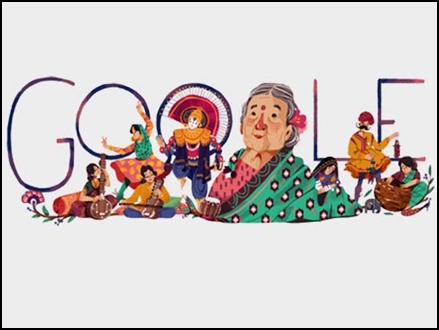 The doodle highlighted Chattopadhyay's contribution to handicrafts, handlooms, and theatre.

• Kamaladevi was a pioneer in cultural institutions and Indian handicrafts.

• It is because of her that institutes and organisations, such as National School of Drama, Sangeet Natak Akademi, Central Cottage Industries Emporium and the Crafts Council of India, exist in India.

• Throughout her life, she worked towards the upliftment of women and her focus was always on brining about the changes in the socio-economic condition of women.

• She was the first woman to be arrested for entering the Bombay Stock Exchange where she tried to sell packets of contraband salt in 1930s.

• Kamaladevi had also been the recipient of several awards including the Ramon Magsaysay Award (1966), Padma Bhushan (1955), and Padma Vibhushan (1987).