The new foreign cooperation department will primarily work to formulate country-wise strategies to promote investment and employment in Haryana. 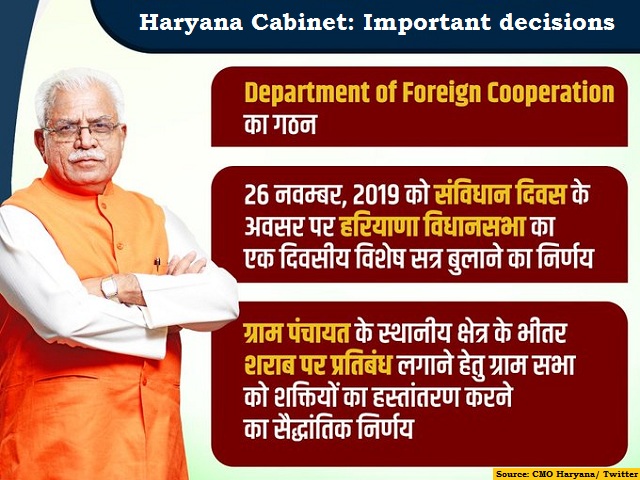 The Haryana state government has decided to create a new department called the Department of 'Foreign Cooperation' to focus on initiatives taken by the state for the promotion of investment, youth employment and welfare of Non-Resident Indians.

The decision was taken at a meeting of the newly-formed Haryana Cabinet under the chairmanship of Haryana CM Manohar Lal Khattar at Chandigarh on November 18, 2019.

The cabinet took several key decisions including setting up the new department to promote investment in the state.

The new Foreign Cooperation Department will primarily work to formulate country-wise strategies to promote investment and employment in the state besides promoting skill development, promotion of the state’s culture and the welfare of its people.

The department is also expected to work in tandem with the Ministry of External Affairs to enhance international cooperation with provinces of foreign nations and increase engagement with cities under the sister provinces and twin cities programmes of MEA.

The key objective of the department will be to pursue issues of interest to the state that involve cooperation between public and private sector organisations. It will also work with bilateral working groups to promote the state's interest in foreign countries in areas such as trade and investment, both in-bound and out-bound. It will also be expected to maintain relations with the Indian missions abroad on matters relating to Haryana. 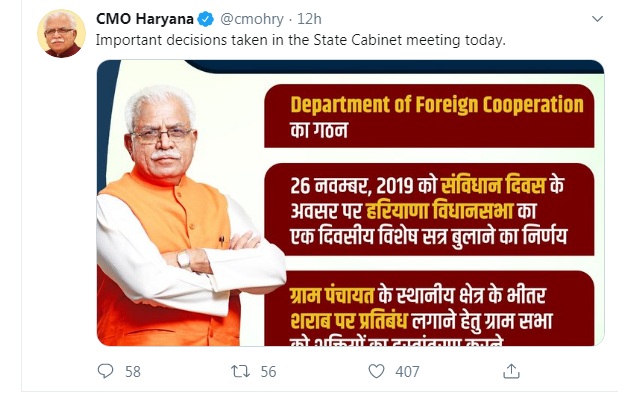 Besides setting up the new Foreign Cooperation Department, the Haryana Cabinet has decided to convene a special Haryana Vidhan Sabha session to commemorate the 70th anniversary of the adoption of the Constitution of India on November 26.

The state cabinet has also decided to double the house rent allowance admissible to the state ministers from Rs 50,000 rupees to Rs 80,000 with an additional Rs 20,000 to cover electricity and water charges, which takes the total allowance to Rs 1 lakh per month. The cabinet will be introducing an amendment in a rule of the Haryana Ministers Allowances Rules, 1972 to make the new changes effective.

The cabinet also decided to set up district task forces to tackle the challenge of drug abuse in the state and bring an amendment in the Haryana Panchayati Raj Act to allow the devolution of powers to the Gram Sabha to ban liquor sale within local areas.

The cabinet also decided to crack down on the illegal stubble burning in the state, which has been a major contributor to the extreme rise in pollution in North India. The state said that strict action is being taken in the matter and around 45 FIRS have already been registered.