Hemant Soren sworn in as 11th Chief Minister of Jharkhand

Hemant Soren took oath as the 11th Chief Minister of Jharkhand on December 29, 2019 at the Morabadi Ground in Ranchi.

Hemant Soren took oath as the 11th Chief Minister of Jharkhand on December 29, 2019. The oath-taking ceremony took place at 2 pm at the Morabadi Ground in Ranchi.

Jharkhand Governor Droupadi Murmu administered the oath of secrecy and office to Hemant Soren. Soren had gone to the Raj Bhavan on December 24 to stake claim to form the government in Jharkhand. The JMM Chief had submitted 50 letters of support to the Jharkhand Governor.

Congress state president Rameshwar Oraon and RJD MLA Satyanand Bhokta were also sworn in as cabinet ministers at the ceremony. The JMM-Congress-RJD alliance had staged a clear victory in the Jharkhand Elections 2019 by winning 47 seats. The alliance received support from five other MLAs as well, including three from JVM, one from CPI (M-L) and one from NCP. 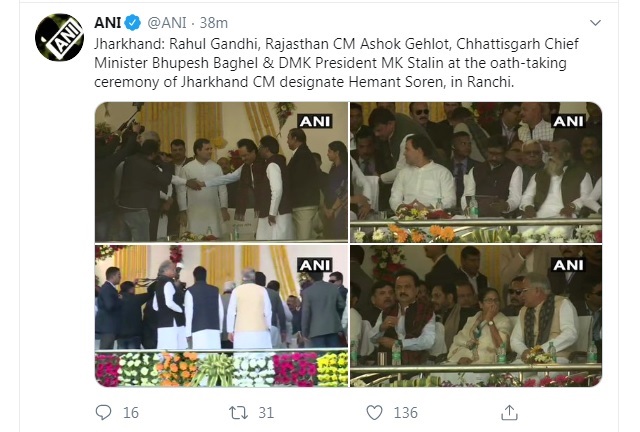 Who is Hemant Soren?

• He had earlier served as the 5th Chief Minister of the state from July 2013-December 2014. His father Shibu Soren was also a three-time Chief Minister.

• Hemant Soren had also served as the deputy CM of Jharkhand from September 2010 to January 2013. He had also been a member of the Rajya Sabha from June 2009-January 2010.

• His political journey had begun when he was elected as the Member of the Legislative Assembly (MLA) in December 2009.

The announcement of the oath-taking ceremony was made through an official communiqué by the Raj Bhawan on December 26, 2019. The state’s Chief Secretary DK Tiwari had met Soren at his residence on the same day to invite him for the ceremony.

The JMM-Congress-RJD alliance won a clear majority in the recently concluded Jharkhand Assembly Polls 2019 with 47 seats in the 81-member state assembly. While the JMM won 30 seats, Congress won 16 and the RJD won one seat.

The opposition alliance left no scope for the BJP, which won just 25 seats. The party’s incumbent CM Raghubar Das himself lost from his bastion constituency- Jamshedpur East.

Among the other parties, JVM won 3 seats, AJSU won two seats and CPI-ML and the NCP won one seat each. Two independents also won from their respective constituency including Saryu Roy who defeated CM Raghubar Das.

The Jharkhand Elections 2019 were conducted in five phases between November 30 and December 20 and the counting of the votes had taken place on December 23. Following the announcement of the final result, the Jharkhand Governor invited the JMM chief to form the government in the state.