What is EVM? How does it work in India?

The Electronic Voting Machine is an electronic device used for casting votes.

The Election Commission had announced the Delhi Election schedule on January 6 and the model code of conduct had come into force with immediate effect.

The term of the current Delhi assembly is scheduled to expire on February 22, 2020. The exit poll results will be announced after the polling ends in all constituencies, as per the mandate of the Election Commission.

The voting in India is done using electronic voting machines since 1999 to simplify the voting process and do away with paper ballots.

What is an EVM?

The Electronic Voting Machine, also known as EVM, is an electronic device used for casting votes. The EVM aims to make the electoral process secure, fair and transparent.

Can EVMs be tampered with?

The EVM is a tamper-proof machine. It is made of a one-time programmable chip, which cannot be connected to any external device or network such as the internet, wifi, USB or Bluetooth. Hence, it cannot be corrupted or modified in any way possible.

What is the process of allotment of EVMS to polling booths?

The EVMS are allotted to the polling booths through an elaborated randomization process. This way, there is no prior knowledge on which unit will go to which polling booth almost until the polling date. The machines undergo mock polls at every stage to ensure that they are in the right working condition. 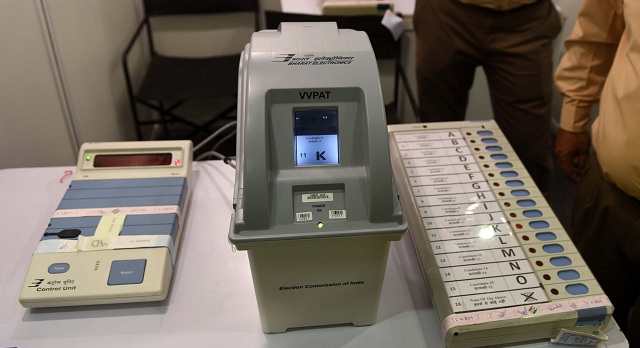 How do the EVMS work?

How to use an EVM?

In order to enable the voter to cast their vote, the polling officer instead of issuing a ballot paper presses the ballot button. The balloting unit of the machine will have a list of candidate names and party symbols with a blue button next to it. The voter can press the button next to the candidate’s name they wish to vote for.

When the voter presses a button of his/ her choice, the machine locks itself and a printed VVPAT slip is displayed for 7 seconds before it's automatically cut and delivered to a sealed ballot compartment. The votes are stored in the VVPAT or Voter Verifiable Paper Audit Trail machine.

The EVM can then be opened only with a new ballot number. This way, EVMs ensure that one person gets to vote only once.