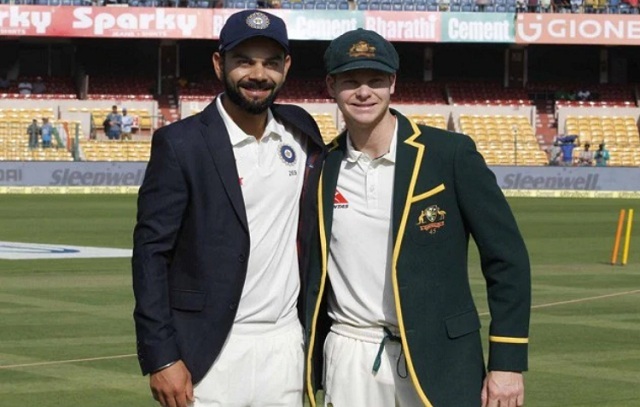 ICC Test Rankings: Virat Kohli has lost his number 1 ICC Test ranking to Steve Smith. The former Australian captain reclaimed the top spot, toppling the Indian skipper after Kohli scored a duck in the second innings of the second test match against West Indies in Jamaica.

Steve Smith’s latest performance has given him a one-point lead over Virat Kohli. Smith would hope to widen the lead over Kohli with another big score in Australia’s fourth test against England at the Old Trafford.

Steve Smith, the former Australian skipper was on top of the ICC Test Rankings list since December 2015. Indian skipper Virat Kohli overtook Smith only in August 2018, when Smith was serving a one-year ban for his role in the ball-tampering scandal in South Africa.

India’s next scheduled Test Series is against South Africa at home in October 2019. Virat Kohli will be able to regain his top spot if he manages to score big during the Test series.

India’s Ajinkya Rahane re-entered the top 10 of ICC’s Test Ranking by improving his earlier rank by four places to be ranked at no.7.

India’s highest run-scorer in the Test series against West Indies, Hanuma Vihari also jumped up 40 places to no. 30 just after six Tests. Vihari amassed a total of 289 runs in 4 innings at an average of 96.33, including one century and two fifties, out of which one score was 93.

Among bowlers, Jasprit Bumrah moved up four places to be ranked no. 3 in ICC Test Rankings. Jasprit Bumrah was adjudged the player of the series in India vs West Indies two-test series after he finished with 13 wickets. Bumrah also became the third Indian to take a hat-trick in Test cricket in Jamaica.