India and Italy have signed six Memorandums of Understanding to boost cooperation in various important sectors including energy and trade and railways. The pacts were signed after detailed high-level talks between Indian Prime Minister Narendra Modi and visiting Italian Prime Minister Paolo Gentiloni. 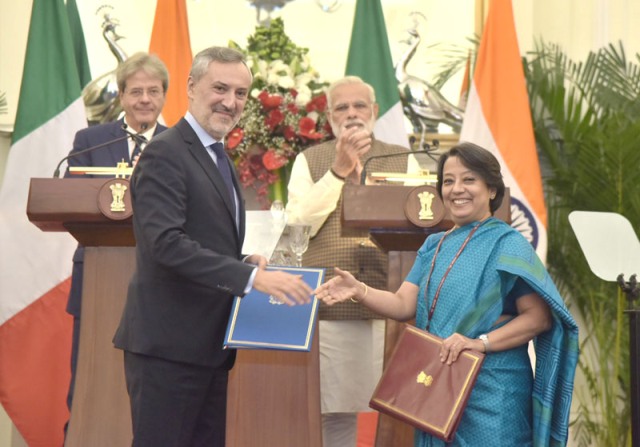 India and Italy on 30 October 2017 signed six Memorandums of Understanding (MoU) to boost cooperation in various important sectors including energy and trade and railways.

A joint statement issued after the meeting read that both the Prime Ministers called upon all the countries to work towards rooting out terrorist safe havens, their infrastructure and networks and halting cross-border movement of terrorists.

The visit is significant for both India and Italy, as the two nations will be celebrating the 70th anniversary of the establishment of their diplomatic relations in 2018.

Following are the six MoUs signed by the two nations:

1. Joint Declaration of Intent of Cooperation for Safety in the Railway sector between India and Italy.

2. MoU on 70 years of diplomatic relations between Indian Council of Cultural Relations and Ministry of Foreign Affairs & International Cooperation of Italy.

3. MoU on cooperation in the field of Energy between India and Italy.

4. Executive Protocol on Cultural Cooperation between India and Italy.

6. MoU between the Training Unit of Ministry of Foreign Affairs and International Cooperation, Government of Italy and Foreign Service Institute of the Ministry of External Affairs, India.