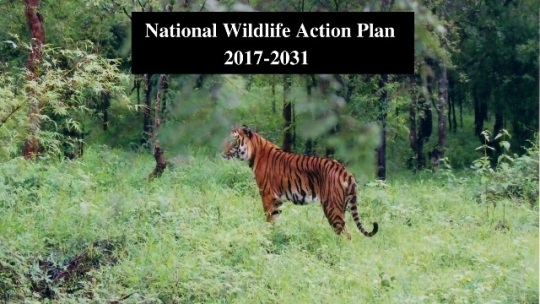 Third National Wildlife Action Plan for 2017-2031 was unveiled by India spelling out the future road map for wildlife conservation.

A road map to conserve wildlife of the country, in the form of an Action Plan was mooted in the 15th convention of Indian Board for Wildlife (NBWL) during 1982 and accordingly, the 1st National Wildlife Action Plan (NWAP-1) was drafted and adopted in 1983. It was put into practice from 1983 through 2001.

• The Plan is based on the foundation that ecological processes that are governed, supported or strongly moderated by ecosystems are essential for food production, health and other aspects of human survival and sustainable development. So, maintenance of these ecosystems that can be termed as ‘Life Support Systems’ is vital for all societies regardless of their stage of development.

• It also emphasizes on other two aspects of living resource conservation that is, preservation of genetic diversity and sustainable utilization of species and ecosystems which has a direct bearing on our scientific advancements and support to millions of rural communities.

• It additionally underlines on other two parts of living resource preservation namely, conservation of genetic diversity and sustainable utilization of species and ecosystems which has a direct bearing on our scientific progressions and support to a million rural communities.

• The plan implements landscape approach in the preservation of all uncultivated flora and undomesticated fauna that has ecological value to mankind irrespective of where they occur.

• It accords special emphasis to the rehabilitation of endangered species of wildlife while conserving their habitats which include coastal, inland aquatic and marine eco-systems.

• It also takes note of apprehension relating to climate change on wildlife by integrating it into wildlife management Planning.

• It also emphasises on the fact that despite being one of 12 mega biodiversity countries of the world, national planning has not taken serious note of adverse ecological consequences of reduction and degradation of wilderness areas from the pressures of commercialization, population and development projects.

This third action plan was unveiled by environment minister Dr. Harsh Vardhan. The government has also emphasized on the increased role of private sector in wildlife conservation.