India, US to increase cooperation in tackling money-laundering

India and the US have committed to boosting cooperation in tackling money laundering and combating terrorism financing. 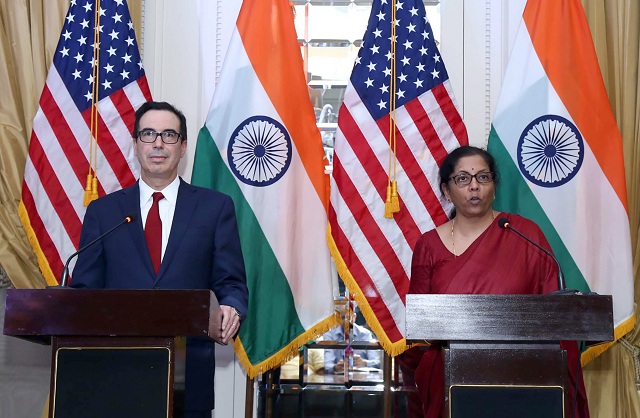 India and the United States on November 1, 2019 committed to boosting cooperation in tackling money laundering and combating terrorism financing. This was decided during the 7th meeting of the Economic and Financial Partnership (EFP) between the top officials of the two countries.

In the joint statement issued after the meeting, both Indian and US officials noted that their relationship has strengthened over time as both sides have developed a holistic approach to tackle money laundering and combat the financing of terrorism, which are the issues of shared concern.

The Indian delegation was led by Finance Minister Nirmala Sitharaman, while the US side was led by the US Secretary of Treasury, Steven Mnuchin.

The US-India cooperation will include information exchanges to combat global terrorist financing and support the designation of specific terrorist facilitators and financiers. It will also include coordinating on the Anti-Money Laundering and Countering Financing of Terrorism Act 2009 (AML/CFT Act) and maintaining the integrity of the Financial Action Task Force (FATF) global standards for the Act.

India and the US will also continue their work on developing the framework of the AML/CFT Act to lessen the associated illicit finance risks.

Both India and the US took note of the progress achieved in sharing of the financial account information between the two countries under the Inter-Governmental Agreement. The two sides will continue to collaborate and share experiences for tackling offshore tax evasion.

India and the US also discussed the policies to boost economic growth. The US noted steps taken by India to strengthen its financial sector such as the recapitalization of public sector banks and merging of some of the state-owned banks.

Both India and the US underlined the importance of paying greater attention to transparency and debt sustainability in bilateral development lending.

The two countries also re-affirmed their commitment to greater economic cooperation on global economic issues, both bilaterally and multilaterally in the G20 and another forum.